A chemical is generally considered hazardous if it exhibits toxicity, reactivity, corrosivity, or flammability. The chemical properties of these substances are such that they can react with and cause damage to living cells and tissue. Exposure pathways include inhalation, skin contact, ingestion, and injection.

Commercially or industrially used hazardous chemicals (also known as Toxic Industrial Chemicals, or TICs) that may be released accidentally include petroleum substances (such as oil, gasoline, and liquid natural gas) and chemicals with industrial applications (such as chlorine and pesticides).

Chemical weapons are often classified according to their effect on the body, based on the primary organ system affected by exposure:

Because hazardous materials are subject to federal, state, and local regulation, major chemical releases are unlikely; however, smaller incidents are possible. They have the potential to endanger public health and contaminate groundwater, surface water, air, and soils.

Within New York State alone, the Department of Environmental Conservation (NYSDEC) annually receives approximately 16,000 reports of confirmed and suspected chemical releases.  The majority involve petroleum products.  Many reports pertain to small quantities, which are contained and cleaned up quickly.

Exposure to a biological agent typically occurs as a result of airborne exposure, skin contact, or ingestion. In general, exposure to bacteria and viruses may occur through inhalation (as is the case with airborne B. anthracis spores, which cause anthrax), ingestion of contaminated food or water (the case with E. coli, which causes gastrointestinal infection), contact with infected individuals, or contact with contaminated surfaces (which could harbor, for example, viruses that cause influenza). Ricin, a chemical toxin of biological origin, has been used in small scale attacks on individuals, typically through injection or inhalation. High profile examples include the 1978 assassination of Georgi Markov, where the attacker used an umbrella rigged with a special tip to inject a ricin pellet under Markov’s skin and letters contaminated with ricin sent to NYC Mayor Bloomberg and a gun control group he founded in 2013.

The impact of radiation upon a person’s health depends on many factors, including the radioisotope, type of radiation, the exposure pathway, the concentration and amount of exposure, and the duration of the exposure. Large exposures delivered over a short period may cause acute radiation sickness and, in some cases, death. Chronic but relatively low exposures to radiation over time (e.g., over a working lifetime) increases the probability of developing cancer, especially if the cumulative dose is significant.

Nuclear incidents involve the release of large amounts of energy in the form of intense light, heat, pressure, and ionizing radiation. With a nuclear incident, radiation exposure occurs on a much larger scale than in a radiological incident. Such incidents have the potential to cause catastrophic loss of life and do direct damage to city infrastructure. An incident of this magnitude could significantly disrupt or terminate civil services. Although the nuclear devices that terrorist organizations may fabricate under special circumstances tend to be relatively small, their use can still cause mass casualties.

Another form of nuclear-related incident is the release of radioactivity from a nuclear power plant via a plant malfunction, terrorist action, or other unexpected event.

A chemical, biological, radiological, or nuclear release becomes a citywide emergency when it poses a threat to human safety and to the environment.

Acute exposures to hazardous materials are difficult to evaluate because people often experience a wide range of adverse health effects. In a typical population, responses among individuals vary significantly, because severity varies according to the intensity and duration of the exposure. For many substances, the data on toxic responses in humans is insufficient to make an accurate assessment of health impacts.

The severity of the hazard, therefore, will depend on the type and amount of material released, the location of the release relative to human populations, and the characteristics of the exposed population.

The severity of a chemical release depends on the toxicity, latency, transmissibility, and persistency of the chemical released. Toxicity measures the degree to which the chemical impairs human health. Latency is the time interval between exposure and the development of clinical symptoms. Transmissibility refers to the potential passage of the chemical between exposed persons and rescue workers, such as hospital staff. Persistency is the time it takes for the chemical to disperse. Where there is uncertainty about a chemicals persistency, responders will act with an abundance of caution. For example, the 2018 Novichok attack in Salisbury, England required a lengthy environmental remediation effort as the persistency of Novichok, which collects in low-lying areas, was unknown. The location of a chemical release and the proximity to residential and commercial areas is key to determining the extent of the likely exposure.

For chemical hazards, the National Fire Protection Association (NFPA) 704M rating system indicates the level of severity of exposure. This system uses numbers and primary colors on a label to define the basic hazards of a specific material. The system represents the risk posed by a particular substance, using a diamond with four colors: blue for health, red for flammability, yellow for reactivity, and white for special hazards. These categories are ranked on a scale from 0 (no hazard) to 4 (extreme hazard), as shown in this graphic.

Material Safety Data Sheets (MSDS) are also used to assess the severity of a chemical release. These documents, developed by the Occupational Safety and Health Administration (OSHA), contains information on the potential hazards associated with chemicals. 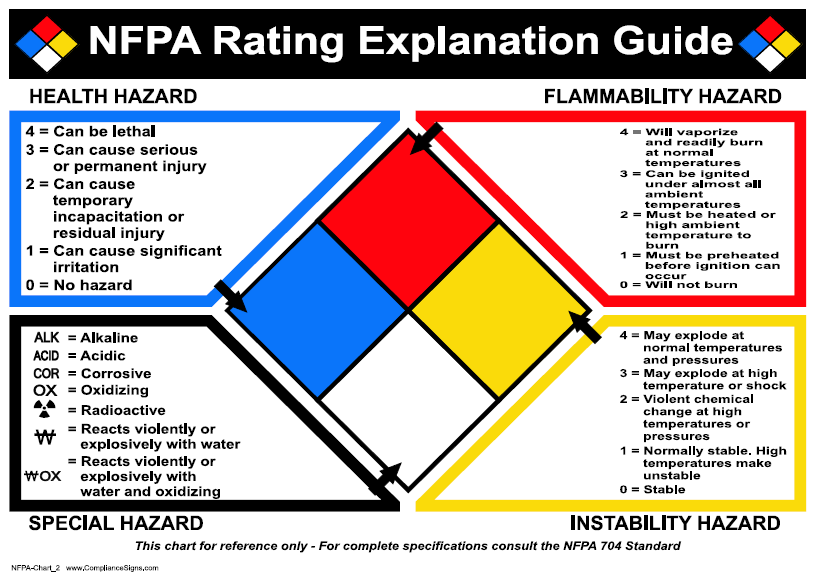 The severity of a biological hazard depends on the type, location, and amount of the release, as well as the size, density, and characteristics of the population affected. For more information about Biological Hazards see the [link to Biological Profiles from DOHMH].

For radiological hazards, severity depends on a number of factors, including whether the dose was a partial body or whole body dose, the exposure rate, the duration of the exposure, the effectiveness of the radiation to harm human tissue, and if internalized, the organs affected. Exposure to a single, short-duration, high dose of radiation (a dose is the amount of energy absorbed by tissue per unit mass) can cause health effects such as acute radiation syndrome. Relatively low doses given over extended periods can cause a cumulative effect resulting in chronic health effects later. The unit of measurement for absorbed dose is the RAD (radiation absorbed dose).

Because certain types of radiation are more biologically effective than others, the absorbed dose must be multiplied by a quality factor to produce a dose equivalent that reflects the type of radiation to which an individual is exposed. The units of measurement for dose equivalent are the rem (roentgen equivalent man); its metric equivalent, the Sv (Sievert); and mSv (milliSievert). One Sv is equivalent to 100 rem and 1,000 mSv.

Doses received over a short period, such as a during a bomb blast, that are greater than 100 rem/1 Sv/1,000 mSv are likely to cause acute radiation syndrome. Acute exposure above these levels can lead to death absent medical intervention.

The table below describes symptoms of radiation exposure from different levels of dose equivalent. 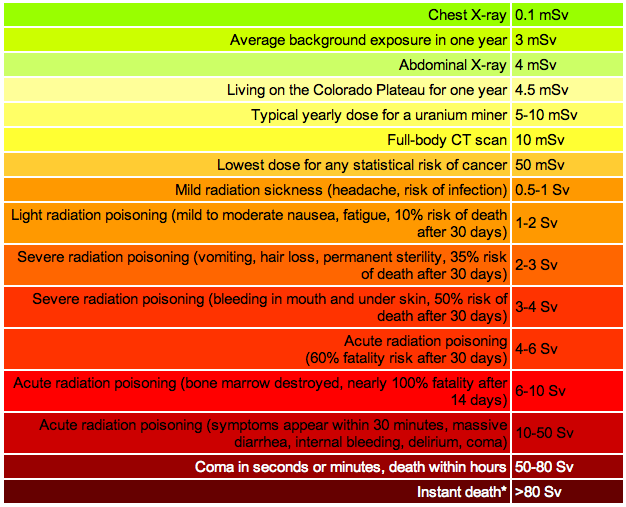 CBRN releases are generally not predictable because calculating the probability or recurrence intervals for specific events is difficult. However, they can be estimated (see NYCDOHMH Public Health Jurisdictional Risk Assessment 2018). The probability of an event will be higher near facilities that are not routinely maintained or inspected, at potential targets for an intentional attack, and at ports or other facilities such as refineries where high volumes of hazardous materials are frequently moved.

When comparing the probability among chemical, biological, radiological and nuclear releases, chemical releases are more likely and occur more frequently, because hazardous chemicals are widely transported and used by a wide range of businesses in day-to-day operations. Nuclear releases are less probable, though the impact could be much greater than a chemical, biological, or radiological release due to atmospheric dispersion and the long-term issues of decontamination and epidemiologic surveillance.

Locations vulnerable to CBRN releases vary according to the type of release and whether the incident is accidental or intentional.

Accidental chemical releases occur at fixed sites or when chemicals are in transit. Fixed sites include industrial facilities, open industrial areas, construction sites, commercial businesses, and even residential buildings with day-to-day materials, such as heating oil. Fires and explosions are possible secondary impacts of chemical releases, and they may also disperse the materials.

Chemicals are transported via highway, rail, air, maritime routes, and natural gas pipelines. A significant number of chemical spills and leaks happen during accidents when hazardous materials are in transit to and from storage or manufacturing facilities. 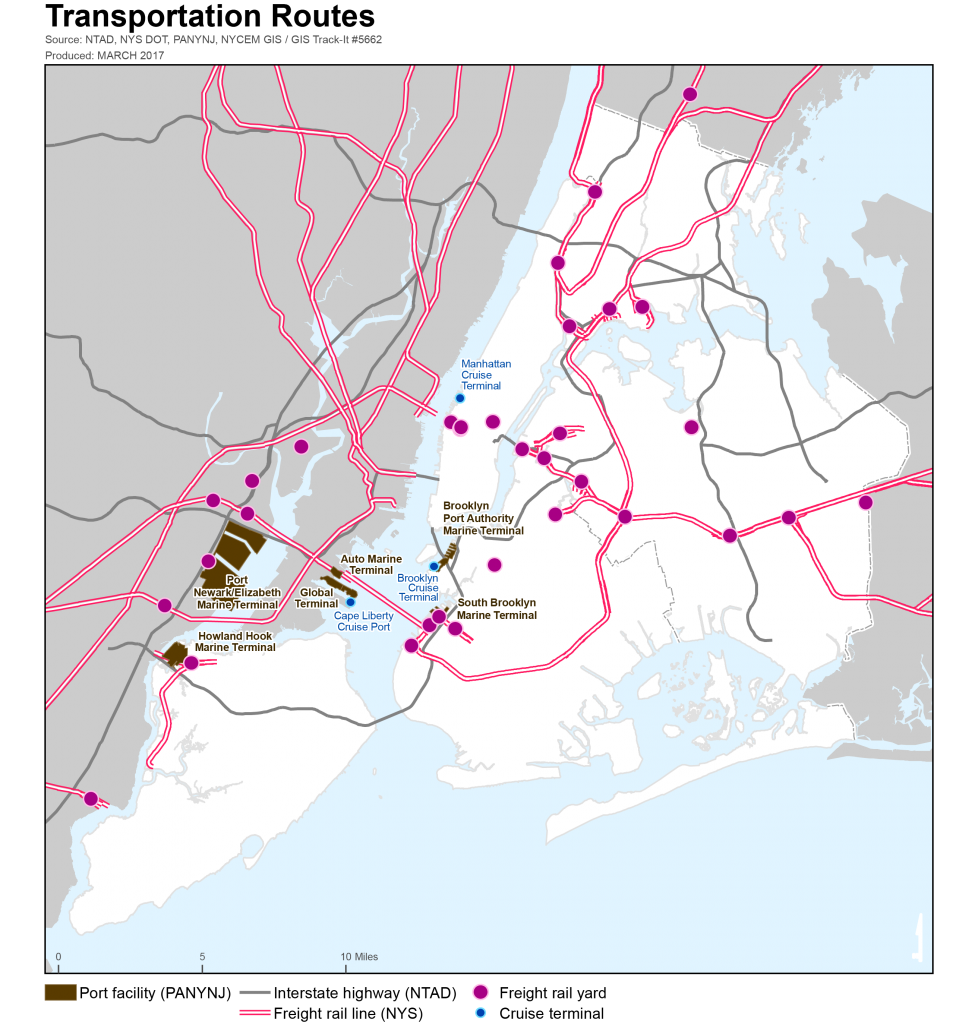 The locations at highest risk of accidental chemical releases include areas proximal to chemical plants; industrial facilities/storage sites; warehouses; and fuel stations. Throughout its history, New York City has had many industrial facilities located strategically along the waterfront to facilitate operations. Residential areas especially, low-income neighborhoods, may be near industrial facilities and present special concerns when recovery is considered.

Industrial and commercial businesses continue to operate on New York City’s waterfront in places such as Hunts Point in the Bronx; Newtown Creek in Queens and Brooklyn; the Brooklyn Navy Yard, Gowanus Canal, Sunset Park in Brooklyn; and Kill Van Kull in Staten Island. Flooding or coastal storm events heighten the risk of a hazardous materials (HAZMAT) release in these locations – the places in New York City at greatest risk from unintended chemical release.

The most likely targets for intentional chemical releases are densely populated, crowded places (such as tourist attractions, the subway system, and entertainment venues) and facilities critical to the life of the city (water supply reservoirs and distribution systems, power plants, ports, and hospitals). Financial centers and government offices are also potential targets for an intentional chemical release.

On a much smaller scale, common household chemicals (such as cleaning solutions) or materials (such as heating oil) are present in most buildings. An unintended release of these everyday chemicals in a home or in the workplace could pose a hazard to human health and life depending on the chemical and amount of direct exposure to humans.

Biological incidents can occur anywhere in the city. New York City’s high density neighborhoods provide biological agents the opportunity to quickly spread. These outbreaks could potentially start from, for example, restaurants or food markets selling tainted food, or from a combined sewer overflow outfall that exposes the public to raw sewage. The most vulnerable locations for intentional biological attacks are the same as those discussed for intentional chemical attacks.

The most likely targets for an intentional radiological attack are often cited as public spaces where contamination can be spread by outdoor conditions. Transit accidents or intentional vehicular attacks involving vehicles transporting medical isotopes also involve the outdoor environment.

Nuclear power facilities do not exist within New York City. The nearest nuclear power facility is the Indian Point Nuclear Power Plant in Buchanan, NY. A nuclear release from this plant (whether accidental or intentional) is not expected to expose New York City residents to harmful radiation unless an extremely large amount is released and combines with a very unique set of meteorological conditions.

When considering improvised nuclear devices, the target set becomes the city in general. According to the FEMA planning assumption, the damage zones for a 10 kiloton weapon extend out at least 3 miles from ground zero. The fallout plume could be at least 150 miles in extent (dose rate > 10 mR/hour).

To generate a list of historic chemical, biological, radiological, and nuclear releases in New York City, use the Hazard History and Consequence Database, an interactive tool developed for this website.