Coastal erosion is the loss or displacement of land along the coastline from the interaction of oceans, waves, and beaches, often coupled with the impact of human activity. Coastal erosion occurs when wind, waves, longshore currents, tides, runoff of surface water, or groundwater seepage move sand and sediment from a shoreline location. This displaced sand and sediment shift from place to place and do not disappear from the overall system unless human activities, such as dredging, permanently remove them. In New York City, seasonal patterns may influence erosion. Winters are typically more erosive, while summers typically bring sediments back to the shoreline.

Human activity may worsen coastal erosion, particularly through poor land use methods. For example, built structures that do not consider coastal erosion cycles or hydrodynamics can increase erosion or shift sediments to nearby areas. Some coastal-control structures along the coast are built to prevent erosion in a specific location; however, if they are not constructed carefully, these structures can actually increase erosion in adjacent areas.

Coastal erosion can be rapid or can occur gradually. However, measuring gradual (or long-term) erosion is often difficult, because the extent of natural erosion in a specific shoreline varies significantly from year to year. If choices are made to dredge or nourish beaches along particular parts of the coast, it can be difficult to determine how much beach is being lost or gained through natural processes and how much is being affected by human activities.

Erosion can also occur rapidly (event-driven); large sections of beaches, dunes, or bluffs may be lost in a matter of days or even hours. For example, according to the U.S. Army Corps of Engineers (USACE), the force of Hurricane Sandy led to losses of 3.5 million cubic yards of sand on the Rockaway Peninsula and 679,000 cubic yards of sand at Coney Island.

Geologists measure the severity of erosion in two ways -- as a rate of linear retreat (feet of shoreline recession per year) and volumetric loss (cubic yards of eroded sediment per linear foot of shoreline frontage per year).

The National Assessment of Shoreline Change, a 2012 U.S. Geological Survey (USGS) Open-File Report, estimated the average annual erosion rate (short-term) in the New England area is 0.3 meters per year. Per this USGS report, uncertainties for these erosion rates range from 0.06 to 0.1 meters per year, depending on the data sources used in the rate calculations.

Erosion rates also vary significantly depending on location, as discussed below.

Gradual coastal erosion is essentially a given, because it is a continuous natural process that affects coastlines in NYC and around the world. Rapid coastal erosion is likely to occur, but the extent of any such erosion is hard to predict because it is based on several factors, including the unknown probability of coastal storms, as described in the hazard profile on Coastal Storms.

Along New York City’s 520 miles of coastline, long-term erosion rates vary significantly because of geology and the physical nature of different locations along the shoreline. For example, shoreline erosion at the base of rocky cliffs has a different pattern than erosion at an oceanfront sandy shore.

Areas along New York City’s southern shore are at greatest risk, since they are exposed to wave action from the Atlantic Ocean and to the waters of many bays, including Lower New York, Gravesend, Raritan, and Jamaica Bay.

The intensity of wave action is affected by wind speed, wind duration, and fetch -- the distance that wind blows over water in a single direction. The magnitude of erosion varies, because different locations can have stabilized inlets or other engineered structures that disrupt the natural movement of sand and sediment. Coastal erosion is subject to seasonal fluctuations and the amount of human activity. The degree to which sand moves and shifts varies from year to year and from place to place.

The State's Environmental Conservation Law regulates properties within CEHAs to limit coastal development in order to protect sensitive areas. The Coastal Erosion Management Regulations (6 NYCRR Part 505) specify a permit program for all proposed construction in the CEHAs. Many activities are regulated and require a Coastal Erosion Management permit from NYS DEC. These include, but are not limited to: constructing or placing a structure on coastal land; altering the condition of coastal land, such as grading, excavating, dumping, mining, dredging, and filling; or any other activity that disturbs the soil.

There are two separate categories that make up the Coastal Erosion Hazard Areas. They are as follows:

Where Shorelines are Most Vulnerable

The United States Army Corps of Engineers (USACE) monitors coastal erosion rates for each of the CEHAs in New York City and data shows both shoreline accretion, or accumulation, and erosion in different areas.

According to a 2016 USACE report, between 1975 and 2010 (the most recent values available) the Rockaway Peninsula’s east and west end had the greatest rates of shoreline increase. Rates at the east and west end had values as high as 15 feet of additional shoreline per year. In contrast, the middle section of the Rockaway Peninsula experienced something different – a small rate of shoreline erosion with losses of up to 5 feet of shore per year.

Along the south shore of Staten Island, the shoreline is generally stable with several exceptions --the shorelines of Oakwood Beach and Annandale are eroding faster than the citywide average. This satellite map shows that parts of the Annandale shoreline retreated as much as 125 feet between 1924 and 2018. 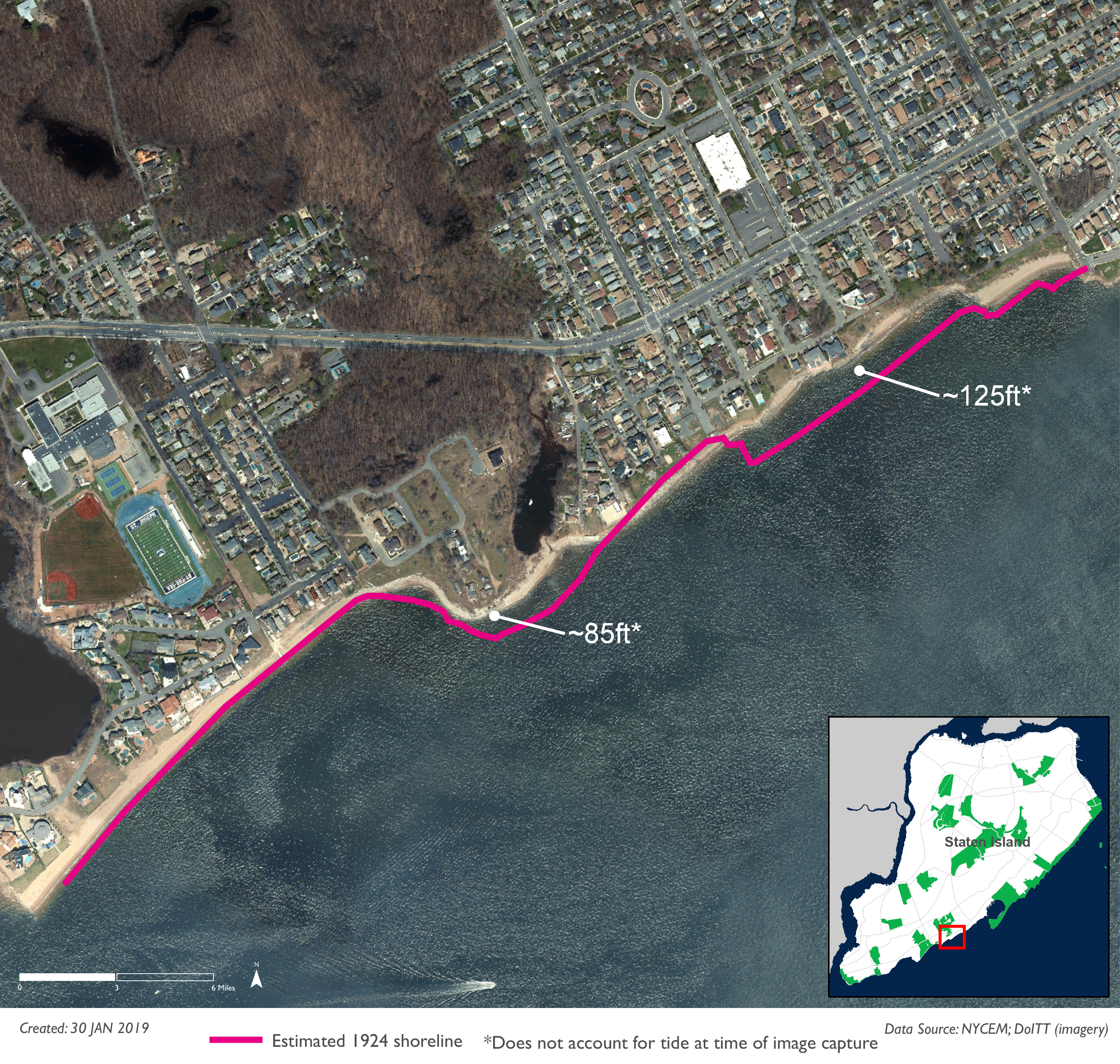 The following map shows erosion hazard areas in Brooklyn, Queens, and Staten Island. Red cross-hatched areas indicate the Natural Protective Feature Areas in the most vulnerable coastal area in each of those boroughs.

The baseline data used to generate these images is from the CEHA maps that the NYS DEC Coastal Erosion Management Unit provided to NYCEM on January 14, 2008. The maps, which were available only in hard-copy format, were dated 1988 with legend updates in 1991.

For the purposes of the Hazard Mitigation Plan, NYCEM translated the CEHA maps from their original hard-copy format into a digital GIS format, which made it easier to view the maps, share data, and estimate the assets within each borough’s CEHA. These images were translated and created for analytical purposes only and should not be viewed as official digital representations of New York City’s CEHA boundaries.

The CEHA boundaries shown on these maps are drawn at the location of Natural Protective Feature Areas only and do not designate the Structural Hazard Areas.

Currently, the NYS DEC is evaluating and updating the New York State’s CEHA maps, which were last updated in the 1980s, to reflect changes in hazard area boundaries that have occurred since the last update. The new, updated maps will utilize more up-to-date mapping technologies; orthoimagery and LiDAR data will be used to revise the maps using ESRI ArcGIS software, and the maps will be substantiated through the use of oblique imagery and field checks. Orthoimagery refers to aerial imagery or satellite images in which distortions (camera tilt, topographical relief) are corrected to create a spatially accurate image. LiDAR uses pulsed lasers emitted at the ground from an aircraft or a mounted sensor and the return time is used to determine elevations. NYS DEC will also substantiate data reflected on the new maps via oblique imagery and field checks. Oblique imagery is an aerial image taken at an angle to allow for less obstructed view of the coastline compared to orthoimagery, which can be obscured by vegetation, shadows, and shoreline structure.

As of this publication, NYS DEC has not released a projected timeline regarding public availability of these updated maps. It is worth nothing, however, that NYC has just released 2017 LiDAR, which includes a new shoreline layer and Digital Elevation Modem (DEM). The City will be conducting analyses on these LiDAR-derived products to better understand erosion and our shifting shoreline from 2010-2017. 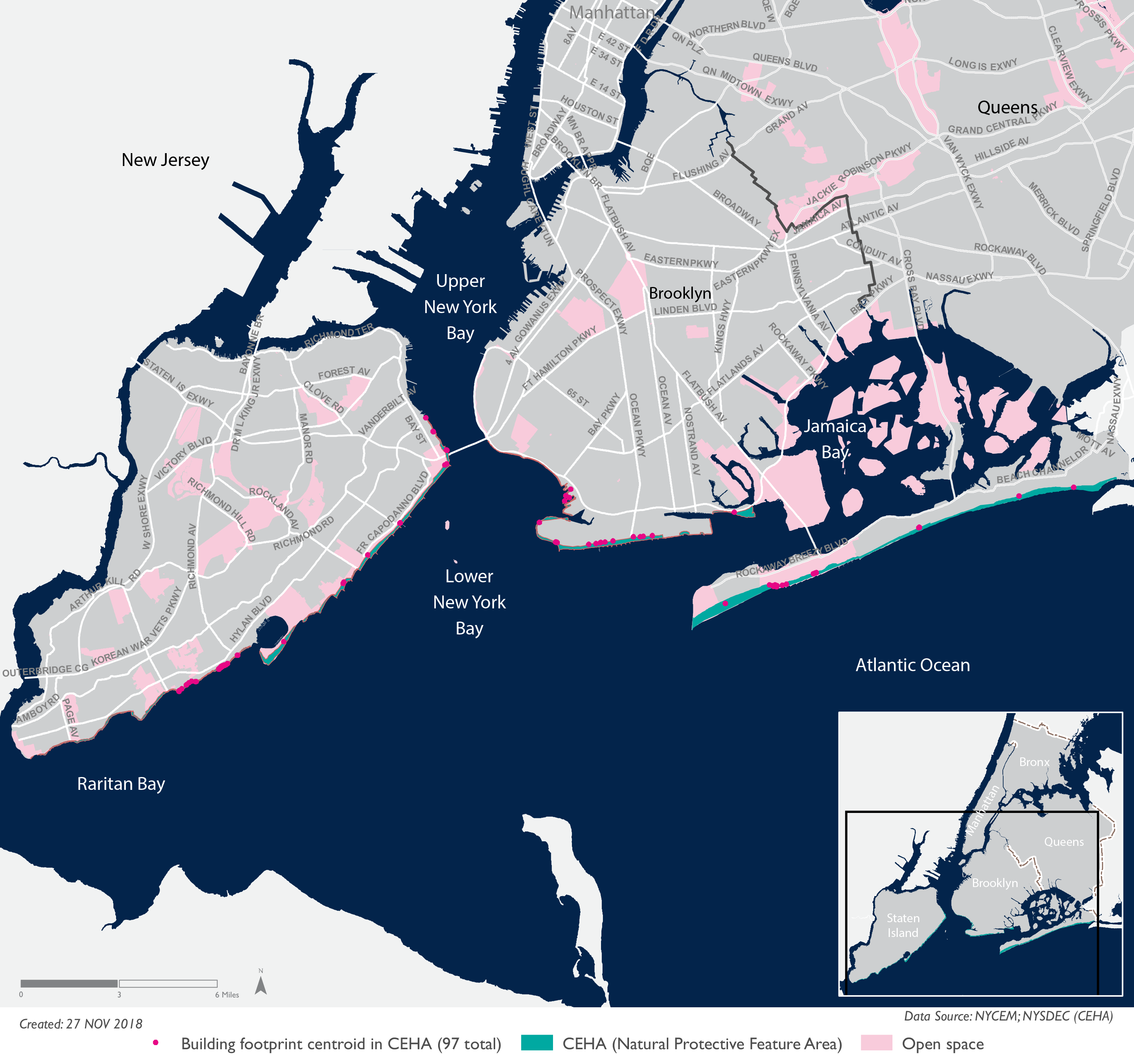 Coastal erosion is an ongoing natural process frequently exacerbated by human activity. Throughout New York City’s history, however, the combined impact of high winds and storm tides during significant coastal storms, such as nor’easters or hurricanes, have caused large-scale, event-driven erosion.

To view a list of historic coastal storms and the waterfront damage sustained in different boroughs, click here.