Tropical cyclones are organized systems of thunderstorms that form over warm tropical ocean waters. These systems rotate counterclockwise in the northern hemisphere around a low-pressure center and are classified into three types:

Once tropical cyclones form, they often track northward or westward until they reach the mid-latitudes (usually the northern Gulf of Mexico, southeastern United States, or the northwest Atlantic), where they turn northward or eastward in response to the prevailing winds. However, when certain meteorological conditions coincide, they may track up the East Coast of the United States and head toward New York City.

The hurricane risk to New York City peaks in mid-September. Although water temperatures as far north as New York City rarely reach 80°F around this time of year, waters are sufficiently warm to allow strong hurricanes to sustain high energy as they make landfall in the New York region.

The strongest winds from tropical systems typically occur on the storm’s right side. The primary hazards from strong winds are downed trees and power lines, structural damage to buildings and property, and flying debris.

Tornadoes commonly form either in the right-front quadrant of the storm, in the storm’s eye wall, or in thunderstorms embedded in rain bands far from the storm’s center. Tornadoes produced by tropical cyclones are usually weak and short-lived, but have the potential to pose deadly hazards.

Storm surge is the tropical-cyclone hazard responsible for greatest number of deaths, as shown in the graphic. 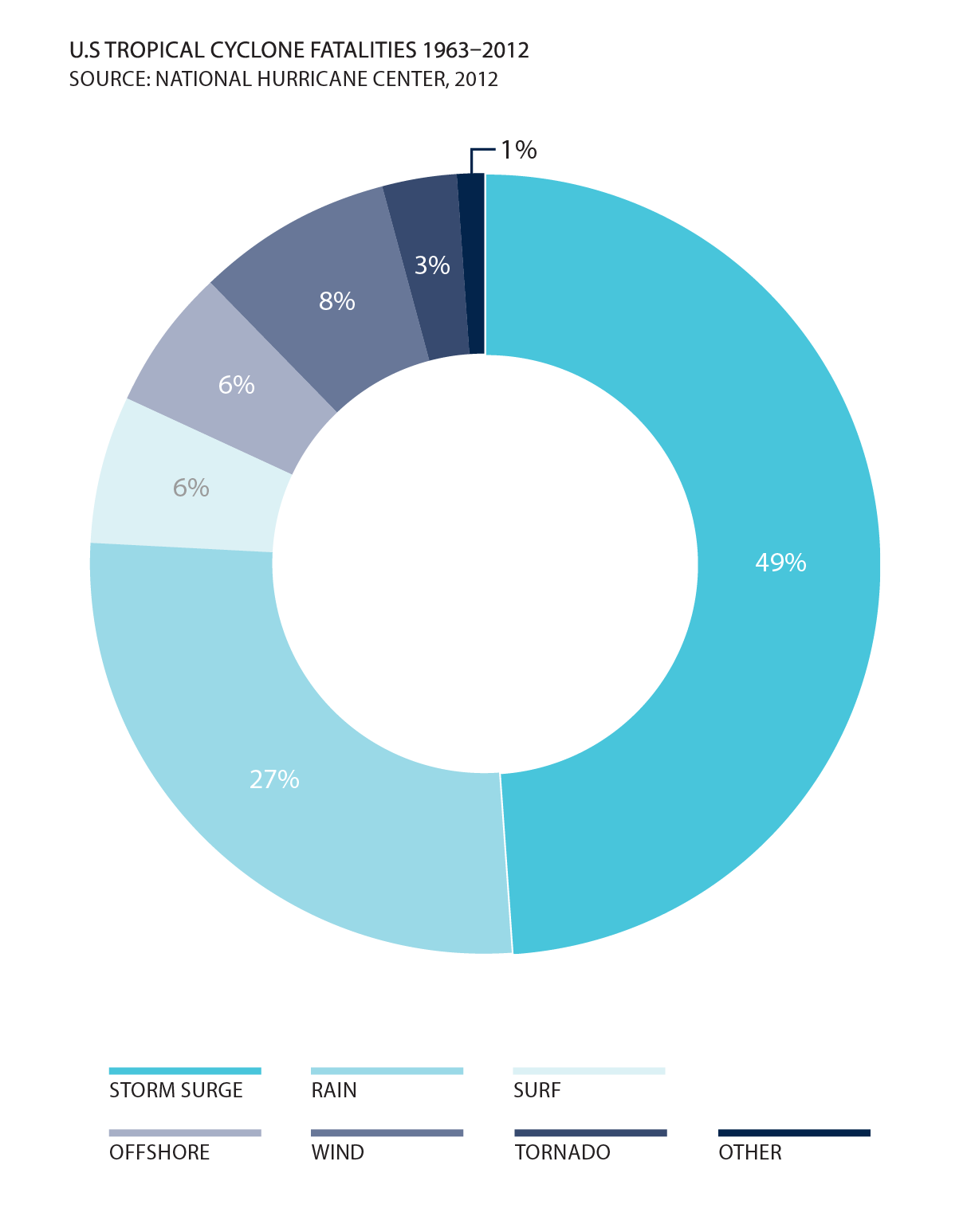 The intensity of the storm surge depends upon several storm characteristics including the maximum sustained winds, forward speed of the storm, size of the wind field, direction of the storm's track at landfall, and the geography of the coastline. The most significant storm surge typically occurs near the eye and in the right-front quadrant of the storm.

The illustration shows how an advancing surge combines with a normal tide to create the hurricane storm tide that can inundate a coast.

Coastlines along the open ocean are exposed to two types of tropical cyclone hazards -- stillwater flooding from storm surge and tides and extremely powerful wave action superimposed upon the storm tide. The hazards resulting from this type of extremely forceful wave action include damage to the beach, local buildings, property, and infrastructure.

A nor'easter is a type of coastal storm that primarily affects the Mid-Atlantic and New England states, between October and April. Like tropical cyclones, nor’easters are associated with heavy precipitation and a counterclockwise rotation around a center of low pressure. The following chart summarizes the differences between tropical cyclones and nor’easters.

Unlike tropical cyclones, nor'easters form outside of the tropics, typically over the northwestern Atlantic, northern Gulf of Mexico, or central or western United States. Nor’easters can originate and sustain themselves over land and are able to form during the cooler months of the year.

When these storms reach the Northeast or Mid-Atlantic coast, the counterclockwise circulation brings winds from a northeasterly direction—hence the name nor'easters. Although nor'easters are typically weaker than hurricanes, they may be larger and have durations lasting multiple tide cycles, creating the risk of more widespread impact. Nor'easters occur more frequently than hurricanes in the New York City area. Due to their frequency, the risk posed by hazards from nor'easters could be considered cumulatively greater than those from hurricanes.

The hazards of heavy snowfall, sleet, and freezing rain are often associated with nor’easters (see Winter Storms ). When a wintertime nor'easter moves up the Atlantic coast and follows a track west of New York City, precipitation often changes from snow or sleet to rain. If a nor’easter maintains a track just off the coast of the city, snow or mixed precipitation likely occurs.

The severity of a tropical storm depends on multiple factors.  However, the ferocity of tropical storms is formally categorized on the basis of wind speed as measured by the Saffir-Simpson Hurricane Wind Scale. This scale categorizes a hurricane's intensity on a scale ranging from one to five based on the storm's maximum sustained wind speed. Levels of potential property damage are associated with each of the five categories. Hurricanes categorized 3 or higher are considered major hurricanes. This scale does not indicate the amount of surge or rain expected from a hurricane, only wind. 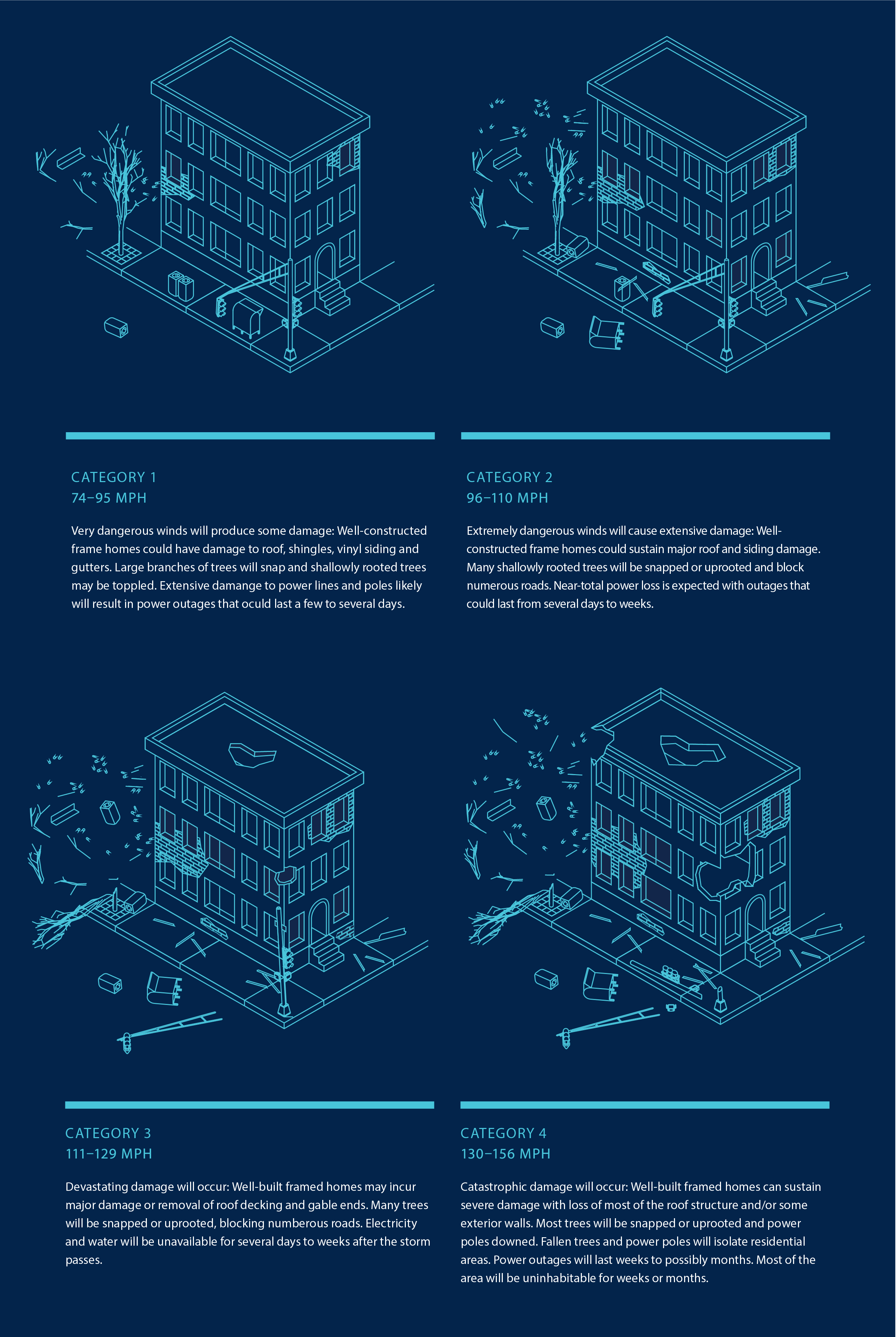 Although the Saffir-Simpson Hurricane Wind scale is a practical way of measuring hurricane strength, other factors contribute to a hurricane's impact on a given location -- the storm's size (proportional to the radius of maximum winds) and speed of its forward motion. A larger, slower-moving storm, for example, may cause greater damage than a smaller, faster-moving storm with high winds because a single location might be battered by winds from a slower-moving hurricane for a longer period of time.

The wind’s fetch -- the distance that the wind blows across the water’s surface -- and its duration also affect a tropical cyclone’s severity.  Wind fetch is determined by the radius of maximum winds and forward speed of the tropical storm. The severity of waves and height of the storm surge is directly affected by how far and how long a specific storm’s winds blow across the water.

Nor'easters do not have a universally recognized classification system, but their strength and severity are influenced by factors similar to those discussed regarding the severity of tropical storms.

When a Nor’easter produces a heavy snowfall, the Northeast Snowfall Impact Scale (NESIS) is used to measure the intensity of wintry precipitation. The NESIS characterizes and ranks high-impact Northeast snowstorms – those with large areas of snowfall accumulations of 10 inches and greater – on a scale of one to five.

The National Climatic Data Center developed this scale to indicate the degree to which Northeast snowstorms might affect the transportation systems and economy of the region and thereby impact the rest of the country. The NESIS index incorporates population data and meteorological measurements to gauge a nor’easter storm's overall impact.

The NHC calculates return periods for hurricanes for various locations along the East Coast of the United States. These return-period calculations represent the average amount of time between the passages of two hurricane eyes within a 50-nautical-mile (57.54-mile) radius of a given location.

The National Oceanic and Atmospheric Administration (NOAA) provides timely storm tide forecasts for non-tropical storms (including nor'easters) on a deterministic basis (a single value for each tide gauge location). New York City typically experiences several nor'easters of different intensity every year. Most of these nor’easters are relatively weak but retain the potential to produce significant rainfall or snowfall hazards that can cause minor-to-moderate damage across the area. The probability of severe nor'easters affecting New York City is low, but they do strike occasionally.

Some academic institutions, including Stevens Institute of Technology and SUNY Stony Brook, provide forecasting services similar to NOAA. Although conducted purely for research purposes, their forecasts are often valuable supplements to official forecasts.

The SLOSH model calculates surge heights for storms that move in different directions and vary in strength from Category 1 to Category 4. Calculations are based on the different wind speeds associated with Category 1-4 storms, the radius of maximum winds, the storm’s forward speeds, storm bearing, and tides. The SLOSH model calculates surge levels for specific locations assuming that each location is hit by the most intense part of a storm. The SLOSH model uses all of these factors to generate a worst-case scenario for storm surge at specific locations in New York City, it does not relate to probability of occurrence.

The map below shows areas of the city likely to experience inundation from different categories of storms, based on the SLOSH model calculations. The extent of inundation and storm-surge depths indicated on the map reflect the worst-case scenario for Category 1-4 hurricanes in different parts of New York City.

The likely inundation depths listed under each location on the map reflect the difference between the height of the storm tide projected for each hurricane category and the land elevation of that specific area in New York City. The red areas on the map represent the areas of the city that could be inundated by storm surge in a worst-case scenario from a Category 1 hurricane.

The CSP evacuation zones employ a range of possible scenarios from the MEOWs, in contrast to the SLOSH maps that only display one worst-case scenario storm surge, the MOM (Maximum of MEOWs) for each category.

Evacuation zones presume a universal worst-case scenario, as if a storm were to make landfall in all parts of the city at once, creating the maximum amount of potential surge inundation in each location. Evacuation orders are issued for an entire zone due to the inherent uncertainty in the forecast, even though a storm will not create worst-case effects in every part of the zone.

The City updated its evacuation zones in June 2013. Unlike the prior set of evacuation zones, which were in place when Hurricane Sandy struck in 2012, the storm's bearing is now a more significant input for the calculation of the new zones.

SLOSH data is not used for nor’easters. However, the National Weather Service provides water level forecast ranges referenced to MHHW and MLLW for tidal gauges around the New York City metro region ahead of an impending coastal flood event. Then, NOAA’s Office for Coastal Management Sea Level Rise Viewer and NWS New York Impact Catalogs is used to determine the potential impacts from that storm.

To see records of coastal storms affecting New York City since 1785, use the Hazard History and Consequence Database, an interactive tool developed for this website.

The figure below shows the tracks of coastal storms to come within 100 miles of New York City between 1851 and 2018. 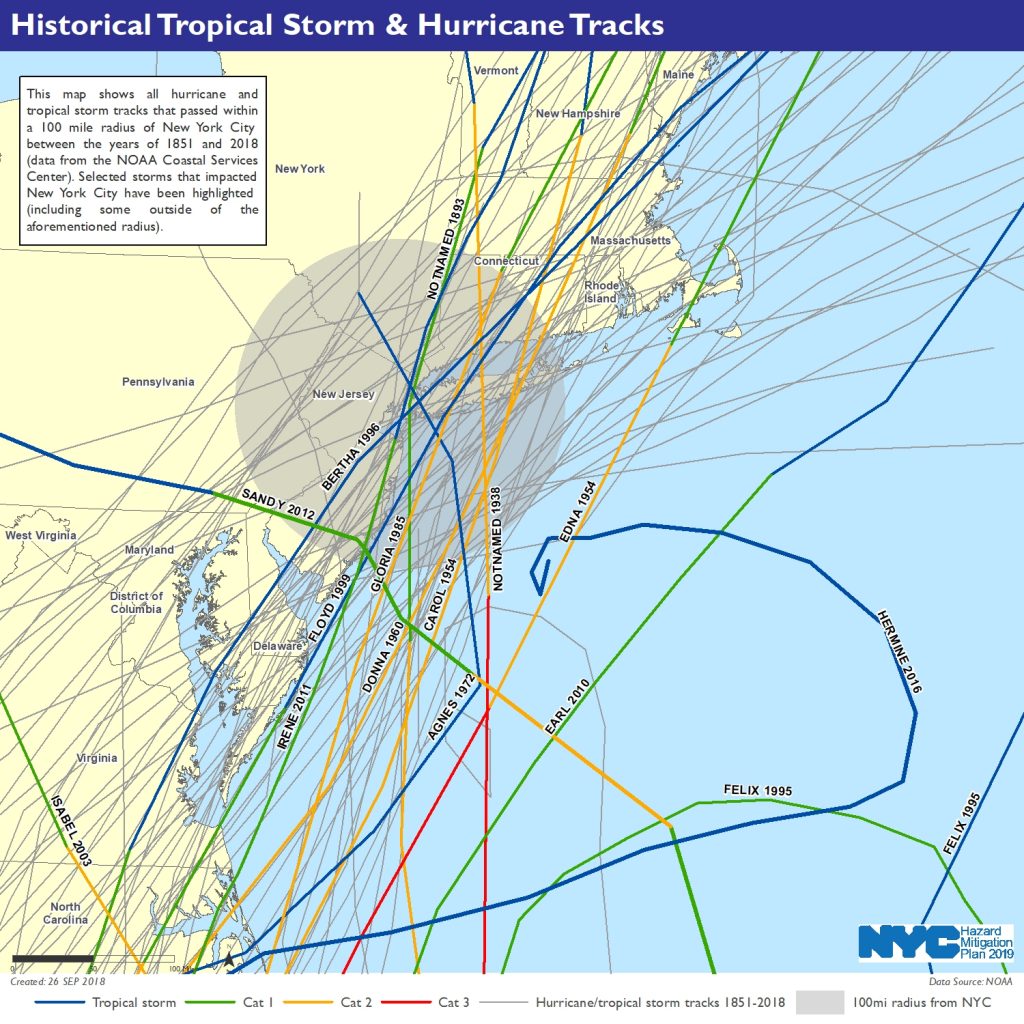 Since the 2014 Hazard Mitigation Plan, the City has had at least three close calls with tropical cyclones that were predicted to make landfall in New York City:

Even though these forecasted storms did not significantly impact the New York City area, they serve as a reminder of the risk that the City continues to face from coastal storms.