Even though earthquakes hit without warning and cannot be prevented, many strategies can be used to reduce the risks associated with them. Risk-mitigation strategies continue to grow more successful as seismologists, geologists, engineers, architects, emergency responders, and other experts innovate new public-safety initiatives in their respective fields.

In New York City, the Department of Buildings (DOB) develops and updates building codes to mitigate risk from earthquake events and enforces them through extensive administrative measures. The seismic regulation follows the developments and improvements in national seismic standards.

Since 1985, FEMA has sponsored earthquake engineering research by the National Earthquake Hazards Reduction Program (NEHRP). Their latest (2009) publication FEMA P-750: NEHRP Recommended Seismic Provisions for New Buildings and Other Structures is the primary source of national seismic design requirements for new buildings and other structures

The goal of the NEHRP recommendations is to assure that building performance will:

New York City’s current building code is as stringent as any in the United States, with the likelihood of failure or collapse of a modern, code-compliant structure being the same as that in California. Codes provide general occupancy conditions for less severe earthquakes. Any existing building in New York City that undergoes substantial modification is also required to adhere to these standards.

The first seismic provisions in New York City's Building Code were signed into law in 1995 and took effect in February 1996. The DOB further addressed the city’s structural vulnerability to earthquakes in 2008, when it adopted the International Code Council's family of codes as the New York City Construction Codes.

The 2008 Codes aim to make buildings stronger, more flexible, and more ductile – able to absorb energy without breaking in a brittle manner. The Codes have sections on soil types and building foundations. Seismic detailing is required to enable a building’s joints, structural connections, and piping to hold up during an earthquake.

Under the 2008 Construction Codes, critical facilities such as firehouses and hospitals were required to be designed to both survive an earthquake event and to also remain open and functional following one.

In 2014, the DOB revised the Construction Codes and moved toward a new concept -- the risk-based approach, following the model of the American Society of Civil Engineers Standard 7-2010 for designing and constructing seismic-resistant structures. These enhanced codes require that new buildings in New York City are designed so it is less likely they will collapse or sustain significant damage during an earthquake.

The revised code also strengthens the design requirements for soil liquefaction and takes the city's unique geologic conditions into account. Building designs must account for site-specific soil conditions and building foundations, and must ensure that joints and structural connections are flexible. Special detailing for electrical and mechanical systems, building contents, and architectural components are also specified.

Code committee work is now in progress for the next revision to the construction codes. DOB is also working on an existing building code and analyzing potential provisions that could improve safety or mitigate hazards in existing buildings constructed before the seismic requirements were enacted.

To make sure that buildings are built to code, new construction and major renovations cannot begin until the DOB has reviewed plans and issued work permits. Most of the details required by earthquake design are subject to special inspections performed by qualified private engineers and responsible to report findings to DOB.

For existing unreinforced masonry buildings, connections between structural elements are strengthened by anchoring walls to the roof and walls to the foundation, thus increasing the structure's ability to transfer loads during an earthquake. Another approach is to add steel frames to unreinforced brick walls to increase resistance to out-of-plane forces.

Simple, commonsense solutions are often enough to improve the seismic performance of a structure and to reduce the seismic risk. For example, anchoring or bolting furniture to a wall reduces the risk that the contents of a building will be damaged when an earthquake shakes it. Anchoring water tanks on buildings that are 6 or more stories is another method to reduce the risk that the tower topples over potentially injuring pedestrians and preventing the loss of water service to the building’s occupants.

Guidelines written to protect coastal buildings from flooding and coastal storms also discuss seismic safety issues, in particular, the vulnerabilities of elevated buildings. To protect buildings with a soft story base, solutions are to lessen the extra load by adding bracing or shear walls, or to enlarge or strengthen the columns and piles.

Routine maintenance on all buildings in New York City is essential to minimize the risks associated with earthquakes. This includes keeping roofs secure and in good condition, securing cornices and aluminum panels, repointing mortar regularly (especially on parapets and chimneys), and fixing all cracks.

Earthquakes can cause major damage to infrastructure that was not originally designed to withstand earthquake impacts – older bridges, tunnels, sewers, water supply systems, and wastewater treatment plants. New York City is acting to mandate that new infrastructure be designed to meet more robust seismic loading requirements, and that older infrastructure be retrofitted to meet those standards. Federal, state, and local government agencies all play roles in setting standards for and managing implementation of seismic safety improvements for infrastructure.

In New York, bridge owners hired seismologists to assess the risk of this hazard here. The Federal Highway Administration administers seismic retrofits of bridges through local authorities, under a 1991 inspection and rehabilitation program mandated by Congress. In 1998, the New York City Department of Transportation developed Seismic Criteria Guidelines, which it updates as new science and solutions emerge.

New York City began seismic retrofitting of critical and essential bridges in 1998. Transportation agencies serving the New York area either have retrofitted or are in the process of retrofitting the bridges that they manage.

NYC Department of Transportation (NYCDOT) is retrofitting the Brooklyn Bridge so that it conforms to current seismic performance requirements in the infrastructure codes. The retrofit includes replacing the original timber piles with stronger structural piles and reinforcing the masonry elements of the bridge. Other bridges were replaced when seismic performance was deemed poor.

Seismic assessment of bridges in the New York City area requires evaluating each bridge for performance standards based on whether the bridge is determined to be critical, essential, or other. Retrofitting of older bridges or designs of new bridges should incorporate design elements that fit the level of damage expected from the projected earthquake, and allow for repairs required after the event.

NYCDOT, which owns and maintains 789 bridges, is in the process of implementing seismic retrofits of all its critical, essential and other bridges. 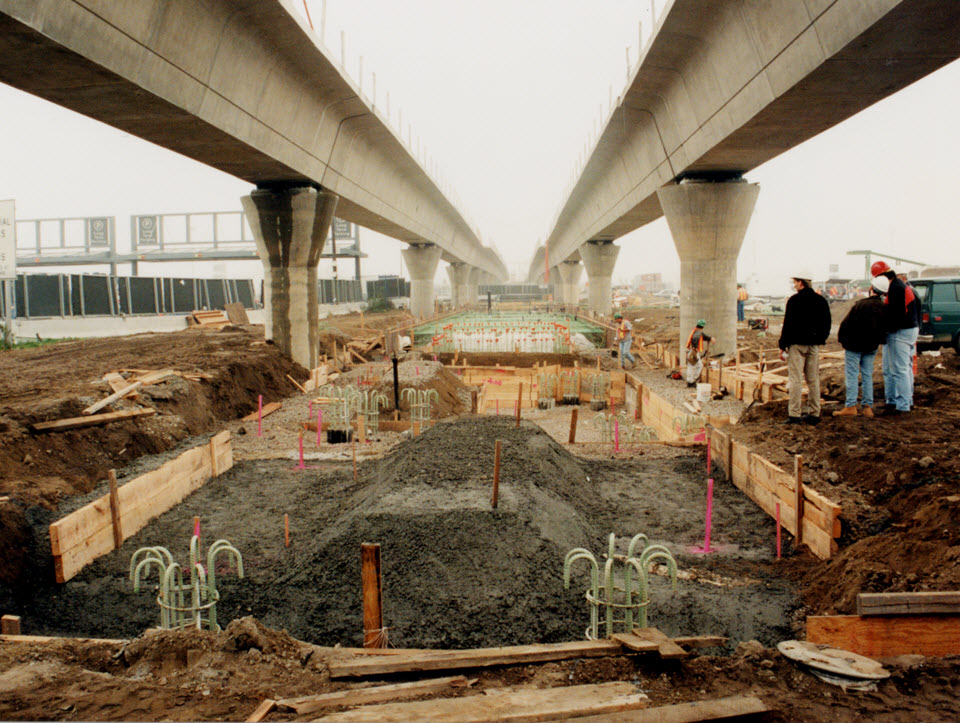 The New York City Department of Environmental Protection (DEP) currently conducts several projects to enhance seismic protection of the wastewater treatment system. DEP is retrofitting wastewater treatment facilities and methane gas storage systems to withstand earthquake activity, because most were designed and built prior to implementation of the current, more stringent seismic standards. To reduce the risks associated with seismic activity to New York City’s sewer system, DEP is inspecting and repairing structural deficiencies in some of the major sewers.

Applying the City’s seismic guidelines, the MTA, which is administered by New York State, is currently incorporating seismic requirements into its bridge and tunnel restoration projects within New York City.

Collaboration among seismologists, geologists, engineers, architects, politicians, and emergency managers is required to manage earthquake risks. Further research into the potential impacts of earthquakes on New York City will expand knowledge about this hazard and promote greater public awareness.

The Next Generation of Ground-Motion Attenuation Models is a multi-disciplinary research project coordinated by the Pacific Earthquake Engineering Research Center, which includes researchers from academia, industry, and government. These experts are working to develop a consensus for new ground-motion prediction equations, hazard assessments, and site responses for the Central and Eastern North American region.

The Earthquake Engineering Research Institute established a New York–Northeast chapter to promote awareness of earthquake risk and to offer educational resources on how to reduce this risk at all levels. The organization relies on interdisciplinary expertise, drawing from the fields of engineering, geoscience, architecture, planning, and the social sciences.

The Multidisciplinary Center for Earthquake Engineering (MCEER), in collaboration with the Structural Engineering Association of New York, initiated studies to better understand the vulnerabilities of unreinforced masonry buildings in New York City. Working with the State University of New York at Buffalo, MCEER has shake-table tested prototypes of unreinforced masonry structure as a precursor to a much larger program that will develop engineered solutions for New York City's archaic building stock.

Many New Yorkers are unaware that their community is at risk to seismic danger from earthquakes. Because earthquakes occur unexpectedly, New Yorkers will not have advanced warning that one will strike, so promoting awareness and preparedness among local communities is essential.

NYC Emergency Management (NYCEM)'s Ready New York campaign encourages New Yorkers to be prepared for all types of emergencies, to develop a personal disaster plan, and to stay informed about the entire range of hazards that may affect the City. NYCEM’s Ready New York Preparing for Emergencies in New York City guide explains what to do when an earthquake strikes and the steps to take immediately after.

NYCEM's Ready New York Reduce Your Risk Guide includes long-term strategies for homeowners and residents to reduce the potential damage that an earthquake can cause.

Earthquakes can inflict psychological harm in addition to physical harm, so it is essential to plan for mental health services as part of any future response and recovery effort. The NYC Department of Health and Mental Hygiene's Mental Health First Aid education program alerts the public to the range of potential mental health issues, how to identify warning signs, how problems are manifested, and the types of commonly available treatments.

FEMA and the Northeast States Emergency Consortium organize annual Great Northeast Shakeout drills to encourage organizations, households, and agencies to practice safety during an earthquake. These drills are an opportunity for groups to update their preparedness plans, restock supplies, and secure items in their homes and workplaces to prevent damage and injuries if disaster strikes.