An earthquake is a sudden, rapid shaking of the earth as plates shift, rock cracks beneath its surface, and large plates either collide or try to push past one other. As rocks and the earth’s plates are strained by these tremendous geological processes, energy builds up under the earth’s surface. Eventually, accumulated energy deep underground becomes so great that it is abruptly released in seismic waves.

From this source, or “focus,” deep underground, the waves travel away and shake the earth’s surface. An earthquake’s epicenter is the point on the earth’s surface that lies directly above the focus. Seismologists and engineers measure the shaking that occurs as “ground acceleration.”

The intensity of ground shaking depends on several factors, including the amount of released energy, the depth of the earthquake beneath earth’s surface, the distance from the fault, and the type of underlying soil or bedrock.

How intensely a built structure responds to shaking during an earthquake depends on the building’s height, weight, and design.

An earthquake has the potential to damage and destroy buildings and a city’s infrastructure and take lives. Under certain conditions, earthquakes can trigger landslides and cause soil liquefaction. The latter occurs when shaking and ground vibration during an earthquake cause unconsolidated, water-saturated soils to soften and turn fluid. Ground shaking, landslides, and liquefaction together can damage or destroy buildings, disrupt utilities, trigger fires, and endanger general public safety.

Earthquake size is classified according to a magnitude scale that expresses the energy released at the earthquake’s source. Seismographs and other scientific tools are used to measure and record data to understand the severity of each tremor in the earth and the severity of each earthquake event. In the past, earthquake tremors were ranked according to the Richter scale, but in the 1970s, the scientific community began to use the more accurate Moment Magnitude scale. The Moment Magnitude scale measures the size of an earthquake at its source in regard to the size of the fault and the degree to which the fault is displaced. It is logarithmic scale -- each point that an earthquake’s magnitude increases on the scale represents an energy release that is 32 times larger than the point that precedes it. 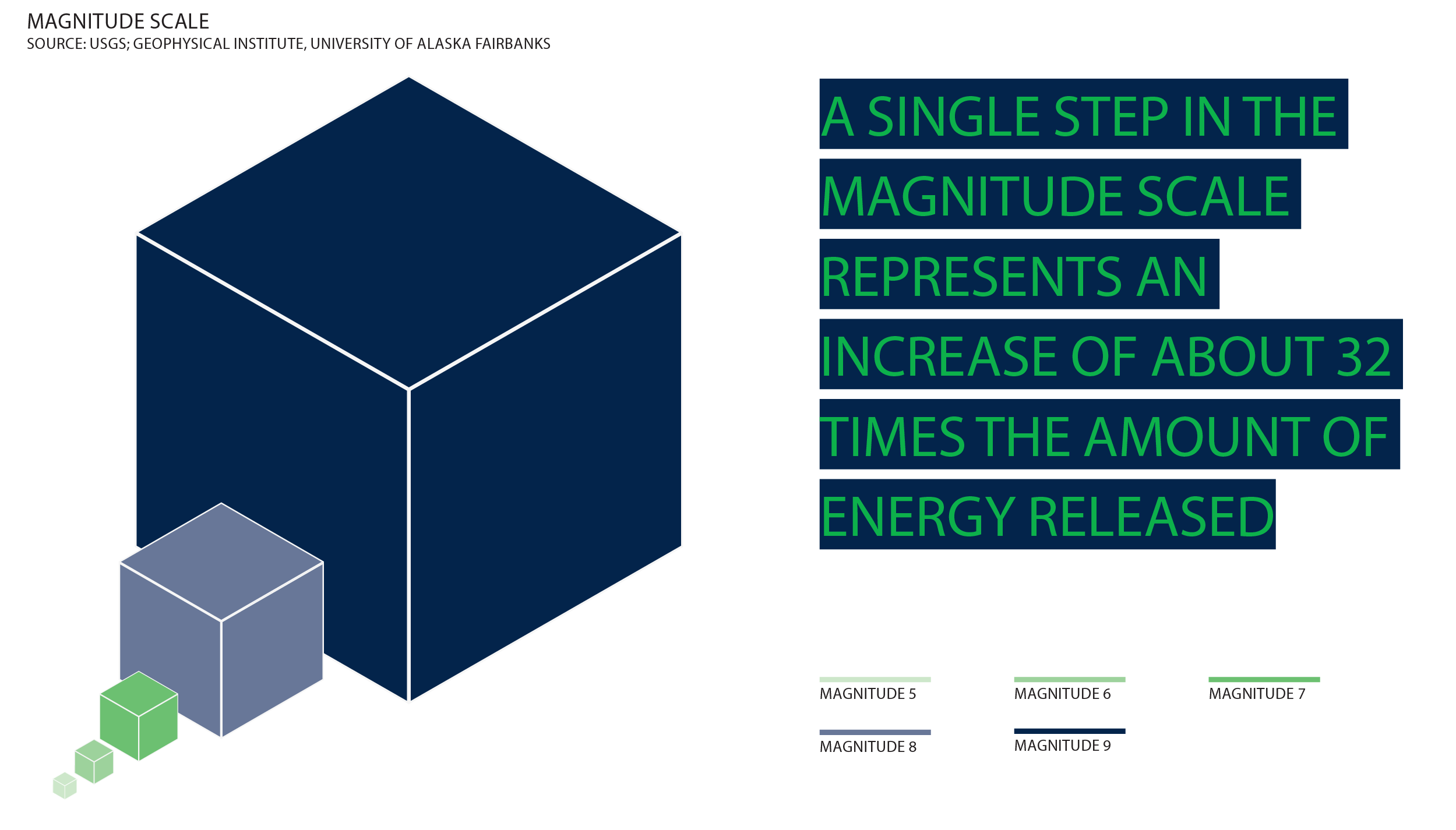 The 2011 Virginia earthquake, which rattled the ground as far away as New York City, was a magnitude 5.8. By comparison, the 2011 earthquake that created such damage to the eastern coast of Japan was a magnitude 9.0 and considered catastrophic. In theory, these earthquake magnitude scales do not have an upper limit, but no earthquake event has yet reached a magnitude of 9.5. The Modified Mercalli Intensity (MMI) scale is a measurement based upon what has been observed in seismic shaking during earthquakes. The MMI reflects twelve categories of intensity based on people’s reactions, their observations, and building damage during seismic events.

Source: USGS Earthquake Hazards Program, 2013 On August 10, 1884, New York City experienced its most severe earthquakes, which was estimated to have a magnitude of 5.2 on the Richter scale. On the MMI scale, the reported maximum intensities of the 1884 earthquake would correlate to Levels VI to VII. Experts also use quantitative methods to describe earthquake severity, such as Peak Ground Acceleration (PGA). PGA is an expression of the ground’s maximum acceleration as it shakes and moves during an earthquake and can be described by its changing velocity as a function of time. Acceleration is an important way to measure and discuss the intensity of an earthquake, because many seismic building codes incorporate it into better, more effective guidelines for building construction. Building codes stipulate, for example, the amount of horizontal inertial force (or mass times the acceleration) that buildings should be able to withstand during an earthquake without life-threatening damage. PGA is expressed as a percentage of acceleration and the force of the earth’s gravity (%g). A very strong earthquake, such as 1994’s magnitude 6.7 earthquake near Los Angeles, produces PGAs of over 100%g in the horizontal direction, which is greater than acceleration due to gravity. The effect of 100%g horizontal acceleration is similar to holding a building by its foundation and turning it on its side for a moment. The table below shows the approximate relationship between MMI and PGA near an earthquake epicenter.

Approximate Relationship between MMI and PGA

Source: USGS Earthquakes Hazard Program, 2013 PGA continues to be an important ground-shaking measurement; however, Spectral Acceleration (SA) is the ground-motion measurement unit commonly used today in modern seismic building codes. Compared to PGA, SA is considered to be a better indicator of damage to specific building types and heights. SA reflects how buildings of particular masses, heights, and structural stiffness (and related natural response period) react to being shaken by an earthquake.

PGA is also used to understand more about the types of earthquake hazards that are likely. The U.S. Geological Survey (USGS), which studies seismic conditions nationally, produces maps that indicate where future earthquakes are most likely to occur, how frequently they might occur, and how hard the ground may shake (PGA).

These maps estimate the probability that ground shaking, or ground motion, will exceed a certain level in 50 years.

In comparison to the previous map, the latest USGS maps, released in July 2014, show that larger, more damaging East Coast earthquakes are more likely to occur in the NYC area. The USGS map here shows that New York City has a moderate seismic hazard.

Frequency of Damaging Earthquake Shaking in the United States 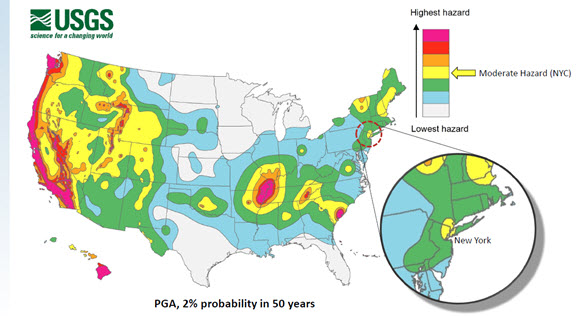 Strong earthquakes in New York City have not been registered, but moderate-magnitude earthquakes are possible. Even if an earthquake’s epicenter is far from New York City, the geology underlying the Northeast United States can cause some ground shaking to be felt right here.

When an earthquake occurs, the older, harder bedrock of the Northeast generates high-frequency motions that can travel long distances before they subside. For example, tremors from the 2011 earthquake in east-central Virginia and the 2013 earthquake along Canada’s Ottawa River were felt by many people in the eastern United States, including New York City. The 2011 Virginia earthquake, which had Moment Magnitude of 5.8, was felt more than 500 miles from its epicenter, making it the most-felt earthquake in modern U.S. history.

If an earthquake occurs in New York City, the unique geologic characteristics of the metropolitan area could result in significant effects due to soil amplification. The two main factors contributing to soil amplification here are the sharp contrast between softer soils and very hard bedrock, and the bedrock motions, which are expected to be relatively short and shake with high frequency.

High-frequency shaking is more common in the bedrock of Eastern United States and typically affects short, two- to five-story masonry buildings. A shallow layer of soft soil (less than 100 feet in depth) sits atop hard bedrock, so shaking is amplified but only for a relatively short period of time. By contrast, a high-rise building atop deep soil deposits will shake longer and shake more slowly during an earthquake.

Subsurface conditions in New York City, which vary widely across the five boroughs, can affect the degree to which an earthquake’s ground motion is amplified. As shown on this map, geologic conditions range from solid bedrock at ground surface (green) to artificial fill (blue). 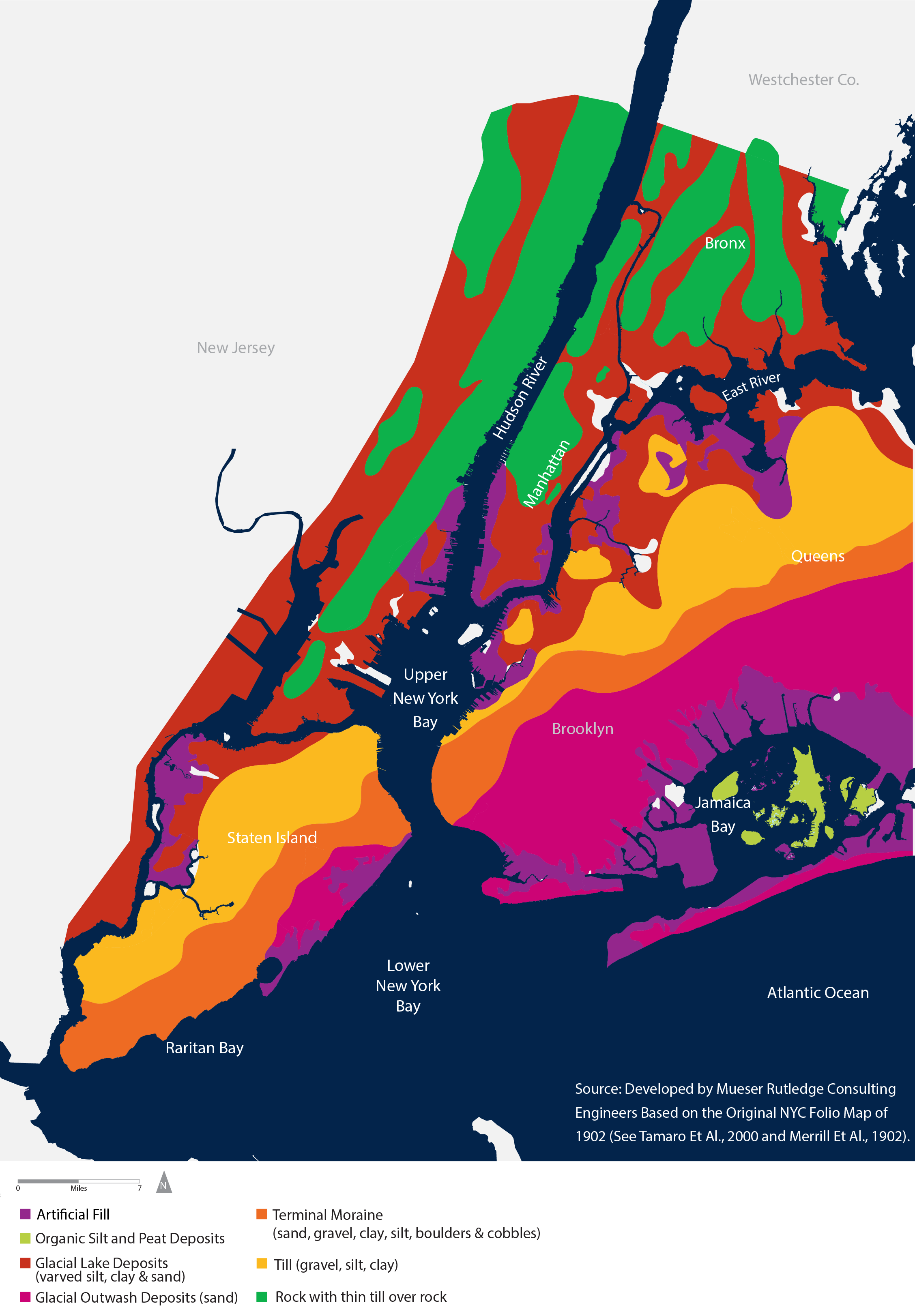 For centuries, large areas of the New York City have been filled to cover soft sediments and marshes to create new space for building development. For example, Manhattan’s present-day Chinatown is on land created by filling in a large pond; the World’s Fair park site in Flushing, Queens was built on an ash dump; and JFK Airport on Brooklyn’s south shore was built atop a hydraulic sand fill. 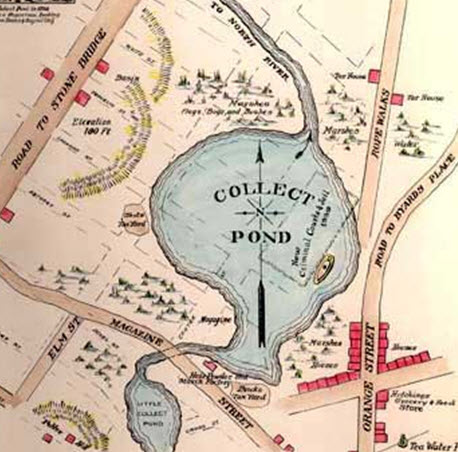 Between 1973 and 2012, New York State had only two damaging earthquakes with magnitude of 5.0 and above. Historically, larger earthquakes have a longer “return period” in New York City. That is, they happen much less frequently than smaller earthquakes.

On August 10, 1884, one of the strongest earthquakes happened near New York City somewhere between Brooklyn and Sandy Hook, New Jersey. Based on contemporary reports of its damage, scientists today estimate it to have been a magnitude 5.2 earthquake. Although considered moderate by today’s magnitude scales, the shaking from this earthquake event was felt from Virginia to Maine, damaging chimneys and brick buildings in New Jersey and New York City. Considering the amount of building and development along the Hudson and in New York City since 1884, if the same magnitude earthquake occurred today, the amount of damage to people and property would be far worse.

The historical earthquakes map shows the distribution of earthquake epicenters throughout the tri-state area from 1737 to 2014. Note that this map shows only approximate locations of epicenters for pre-1973 events; also, not every pre-1973 earthquake event is included on the map.

For more information on past earthquake events, use the Hazard History and Consequence Database, an interactive tool developed for this website.