Extreme heat events, which are projected to increase in frequency and severity in New York City over the next few decades, can have significant consequences for at-risk populations and infrastructure – a situation that calls for implementation of more comprehensive risk management strategies.

Before a heat wave strikes, the public – especially at-risk populations – must be made aware of the dangers of prolonged exposure to extreme heat, the types of people that are most at risk and why, and the practical measures people can take to protect themselves, their families, and their neighbors.

Experiences of severe heat waves in other cities have led New York City to enhance its own risk management strategies.

During heat waves, New York City and its partners take the following actions to keep vulnerable populations and the general public safe:

Government agencies and private sector entities pursue a wide range of short- and long-term strategies to manage risks associated with heat-related hazards to infrastructure. Some long-term initiatives have the critical short-term benefit of reducing demand on the power grid and the associated risk of power outages.

Transportation systems can be protected from hazards associated with periods of extreme heat with measures such as:

The Metropolitan Transportation Authority (MTA) has invested in ways to protect its systems and equipment from heat-related damage, such as implementing new redundancy measures and making structural improvements to trains, railroad tracks, and buses.

New York City’s Department of Transportation (DOT) is studying the use of permeable pavements for its roads and bridges. The greatest advantage of deploying these types of pavements is to reduce the impacts of heavy precipitation and snowmelt; however, use of these materials, which remain cooler than typical roadway surfaces during summer months, may also reduce the damage to road surfaces during from heat waves.

Several long-term strategies in New York City aim to increase the energy efficiency of buildings, and lower indoor air temperatures – steps that help to reduce energy consumption over the long-term. These strategies with New York City’s built environment can reduce the risk of power outages and reduce reliance on other short-term strategies, such as utility demand-response programs.

Many buildings have been designed and constructed to achieve performance standards that exceed the minimum required in New York City's Construction Codes, and to keep internal building temperatures low through energy efficiency. These high-performance buildings use advanced designs and construction techniques -- windows that keep cool air from escaping during summer, rigorous air sealing, and extensive insulation.

The Mayor’s Office released One City: Built to Last, a plan to reduce greenhouse gas emissions 80 percent by 2050, followed by New York City’s Roadmap to 80 X 50, which proposes reducing building energy use by improving the efficiency of building systems, equipment, and operations, and by dramatically expanding on-site renewable energy generation.

Existing buildings in New York City can benefit from retrofits so that their energy consumption is lower during periods of extreme heat. Several types of energy-efficient improvements can be made:

NYC CoolRoofs, a partnership between NYC Department of Small Business Services, Mayor’s Office of Resiliency, and Sustainable South Bronx, promotes and facilitate the cooling of New York City's rooftops by installing a reflective coating to dark roofs. The program provides free cool roof installations to nonprofits, affordable housing, and select cooperatively-owned housing. Privately-owned buildings can receive installations at minimal cost. The initiative also provides local job-seekers with training and paid work experience coating rooftops. The following map shows the locations of cool roofs installed by the program and reported by building owners from 2009 – 2019.  Since the program’s inception over 10 million square feet of Cool Roofs have been installed in NYC. As part of Cool Neighborhoods initiative, since 2017, the City targets outreach and prioritizes installations in the most heat-vulnerable neighborhoods using the Heat Vulnerability Index. 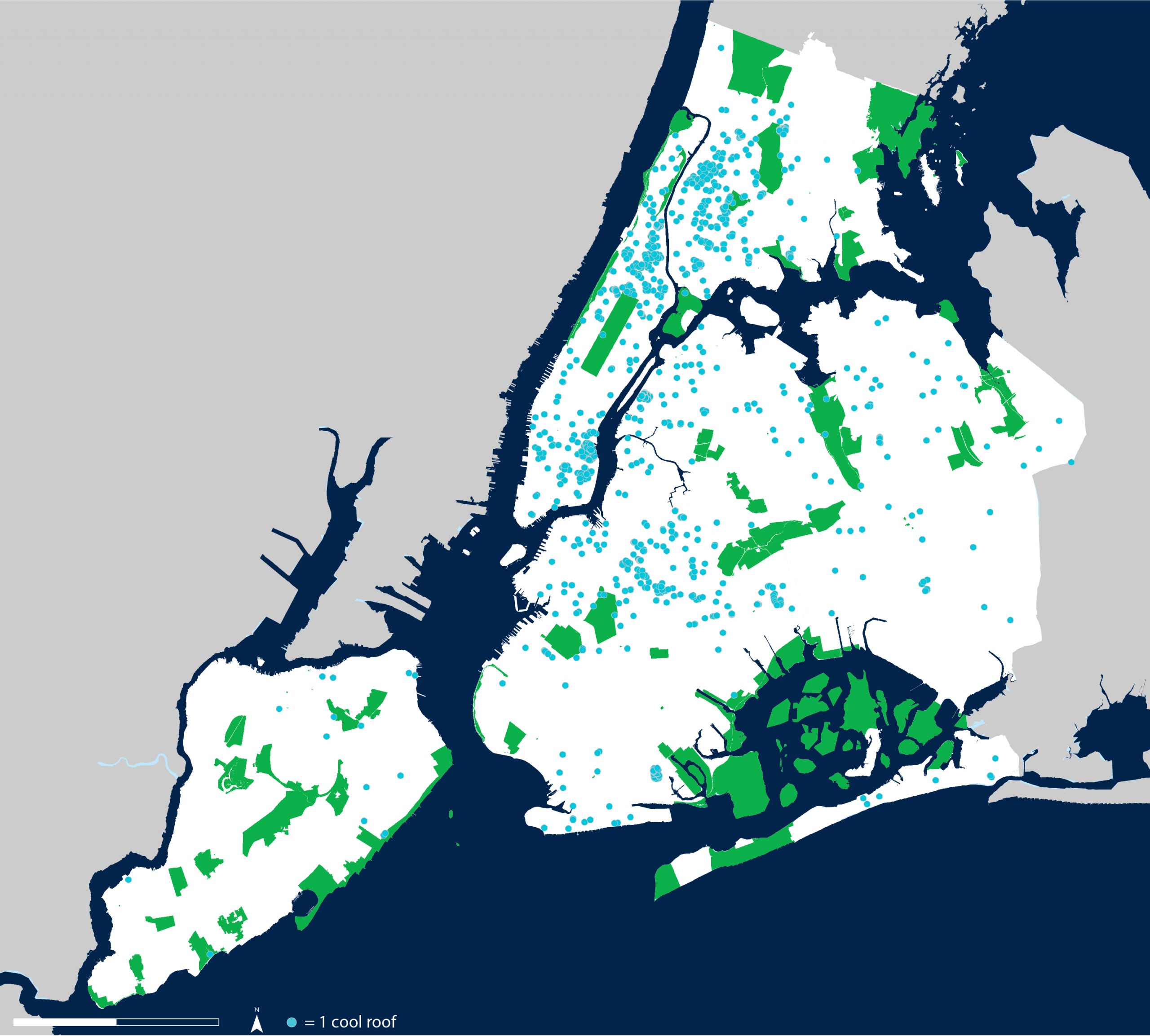 The New York City Department of Housing Preservation and Development (HPD) has developed New York City Greenhouse, a program to help building owners retrofit with higher-performance materials, which would reduce the amount of energy and water used in building operations. This program provides tax credits, rebates, and incentives that promote energy efficiency, and offers tips on how to lower energy bills.

Actions taken by New York City to reduce the amount of greenhouse gas emissions serve the long-term goal of slowing the rate of climate change. Taking action to increase the energy efficiency of New York City buildings has a more immediate impact -- to avoid power outages during periods of extended heat and reduce building electricity costs. 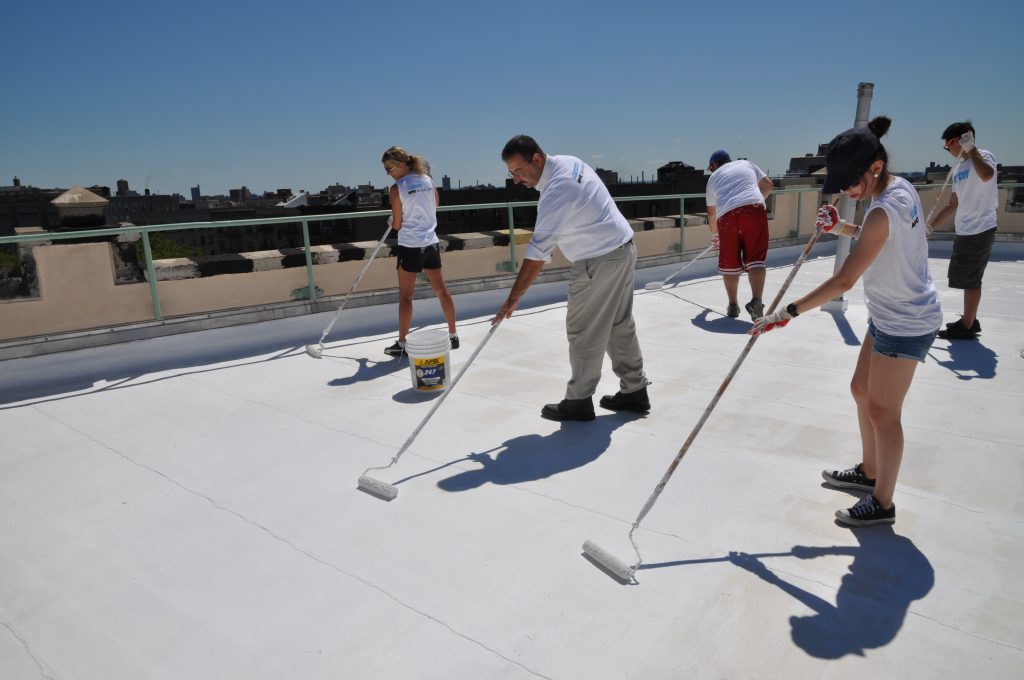 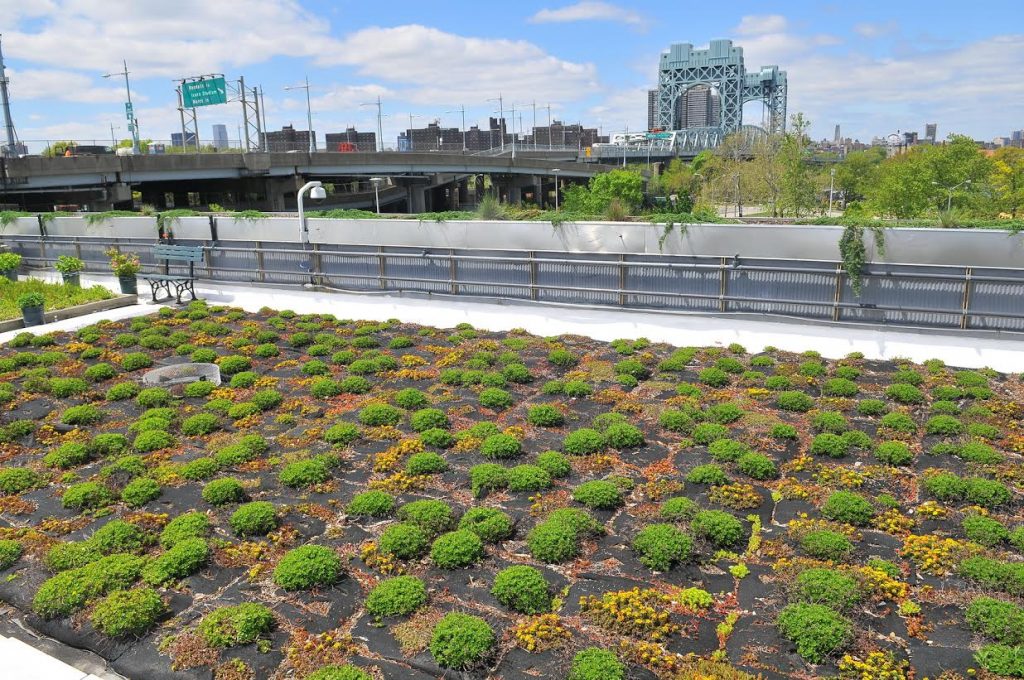 In June 2017, the Mayor’s Office launched the Cool Neighborhoods NYC initiative to protect communities from extreme heat events and also from rising average temperatures due to climate change. The mitigation and adaptation efforts of this $106 million initiative include targeting the NYC CoolRoofs program, and strategic tree planting in heat-vulnerable neighborhoods, partnering with community-based organizations to launch “buddy systems” in three boroughs, training home health aides, community health workers, and health and weather reporters, and monitoring temperatures in neighborhoods that are most at risk to adverse health impacts during heat waves.

Certain features of New York City’s natural environment can partially offset the impact of extreme heat upon different neighborhoods. The urban heat-island effect is directly tied to a neighborhood’s ratio of ground covered by natural vegetation to that covered by asphalt and other artificially built, impervious surfaces. Trees and vegetation naturally cool the surrounding air by releasing moisture and absorbing carbon dioxide from the atmosphere; by contrast, many built surfaces trap heat and keep the surrounding environment warmer. Planting trees and vegetation along streets and in open spaces serves as ecological infrastructure in New York City and can significantly reduce local air temperatures. Replacing concrete, asphalt, or even grassy surfaces with trees can reduce the local air temperature by several degrees. Green roofs – roofs with vegetation planted on them – can reduce both outdoor and indoor air temperatures. MillionTreesNYC is a public-private initiative that was launched in 2007 by New York Restoration Project and the New York City Department of Parks and Recreation with a goal of planting and caring for one million new trees citywide by 2015. The City planted 70 percent of these trees in parks, along streets, and in other public spaces. The remainder were planted by homeowners, businesses, and community organizations. As of November 24, 2016, the 1-million-trees goal was reached.

Bioswale in Queens by NYC Greenstreets 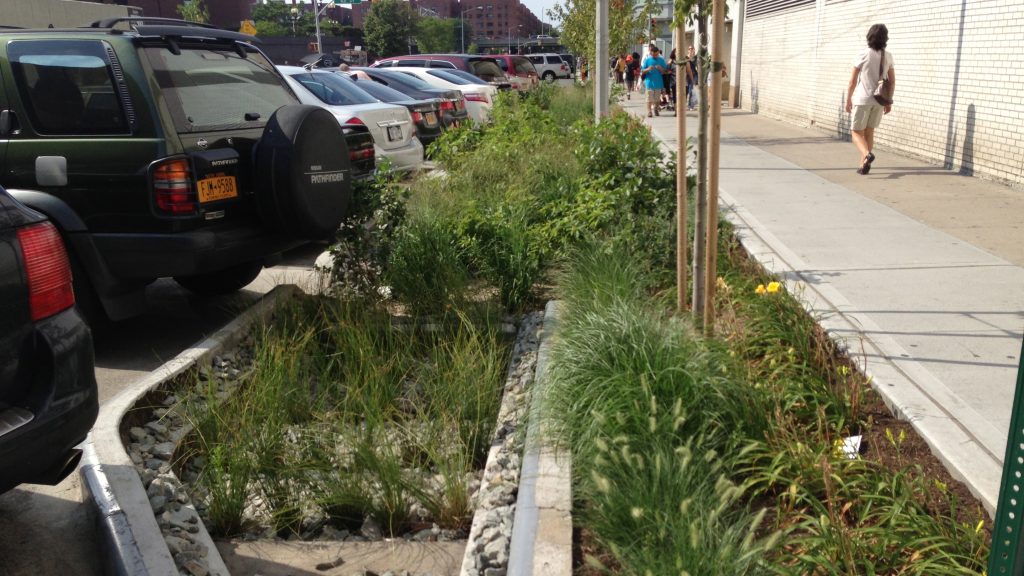 The City's Green Infrastructure Program, led by New York City’s Department of Environmental Protection, promotes a variety of sustainable green infrastructure practices, including green roofs, rain gardens, and right-of-way bioswales on City-owned property such as streets, sidewalks, schools, and public housing. Although this program’s goal is primarily to reduce the impacts of stormwater runoff and combined sewer overflows, its green-roof and other strategies also help to reduce the urban heat island effect in New York City.