During the summer, New York City usually experiences one or more periods of extreme heat. Heat is not only uncomfortable, it can be dangerous – causing dehydration, heat exhaustion, heat stroke, and in severe cases, death. Periods of extreme heat can also lead to pressure on the power grid, causing outages that can create a cascade of negative impacts throughout the city.

Extreme heat events are most likely to occur between June and August, but they sometimes occur as early as May and as late as September. Between 1981 and 2010, temperatures in Central Park reached 90°F or higher for about 18 days per year.

Hazards from extreme heat are made worse when accompanied by high levels of humidity – the amount of moisture in the air. As the temperature climbs, the air is able to hold more moisture. High humidity hinders a person’s body from cooling down naturally, leading people to perceive that the temperature feels hotter. The combination of temperature and humidity – what the temperature “feels like” – is known as the heat index.

The National Weather Service (NWS) uses a heat index chart to determine the effects particular combinations of temperature and humidity will have upon the general population. 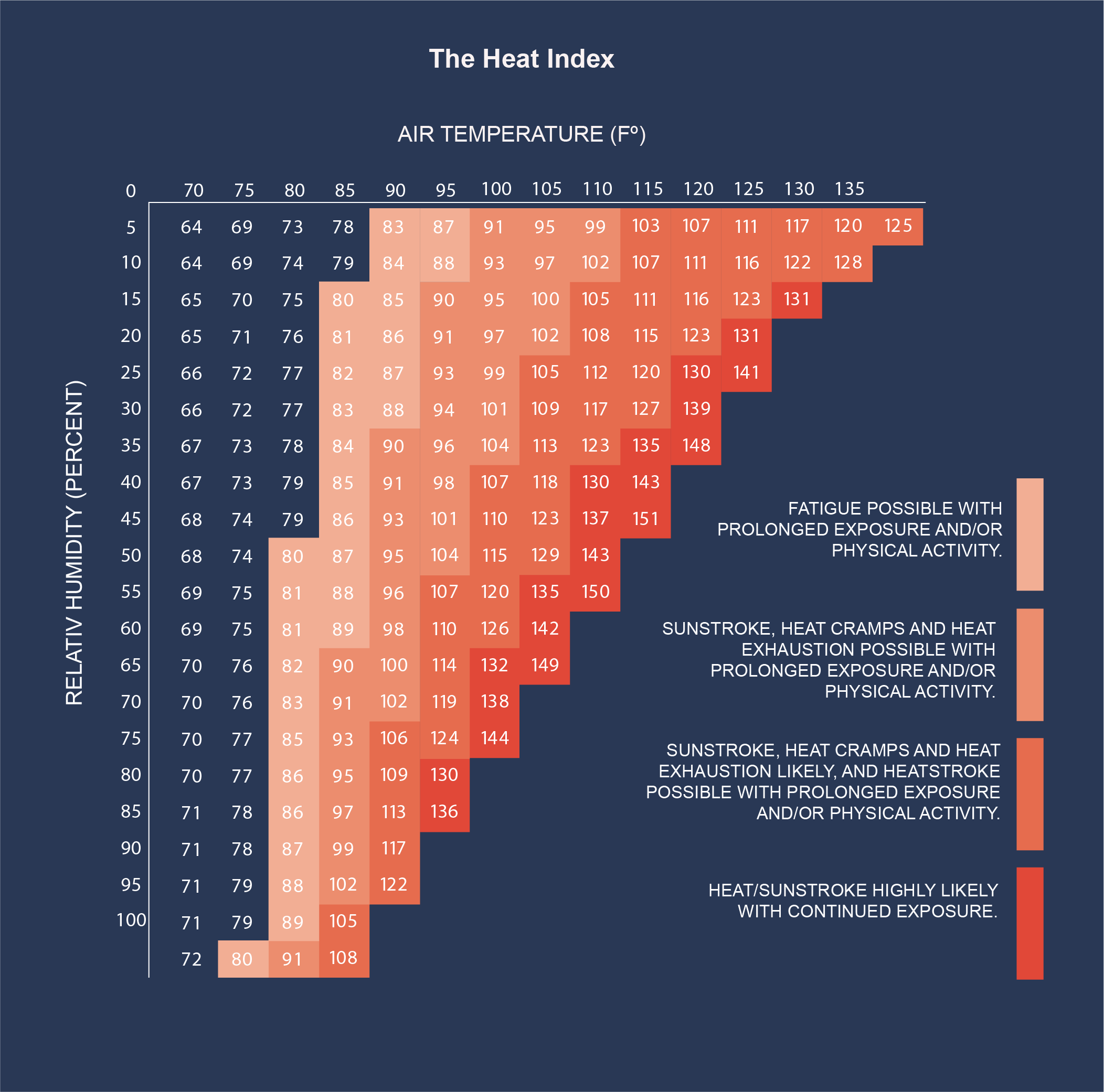 Note that the heat index values used in this chart are calculated in the shade and are not adjusted for different levels of sun exposure. Thus, when people are exposed to full sunshine, they can feel much hotter than the temperature indicated on this chart. During hot weather, the stress a person experiences from the heat depends upon: the temperature, location, and air movement as well as level of physical activity, and exposure to sunlight and radiant heat from nearby surfaces.

When the NWS issues an extreme “heat product,” it:

Based on historical NWS data recorded at Central Park, the annual number of days with high temperatures of 90°F and above has been increasing since the late 19th century. 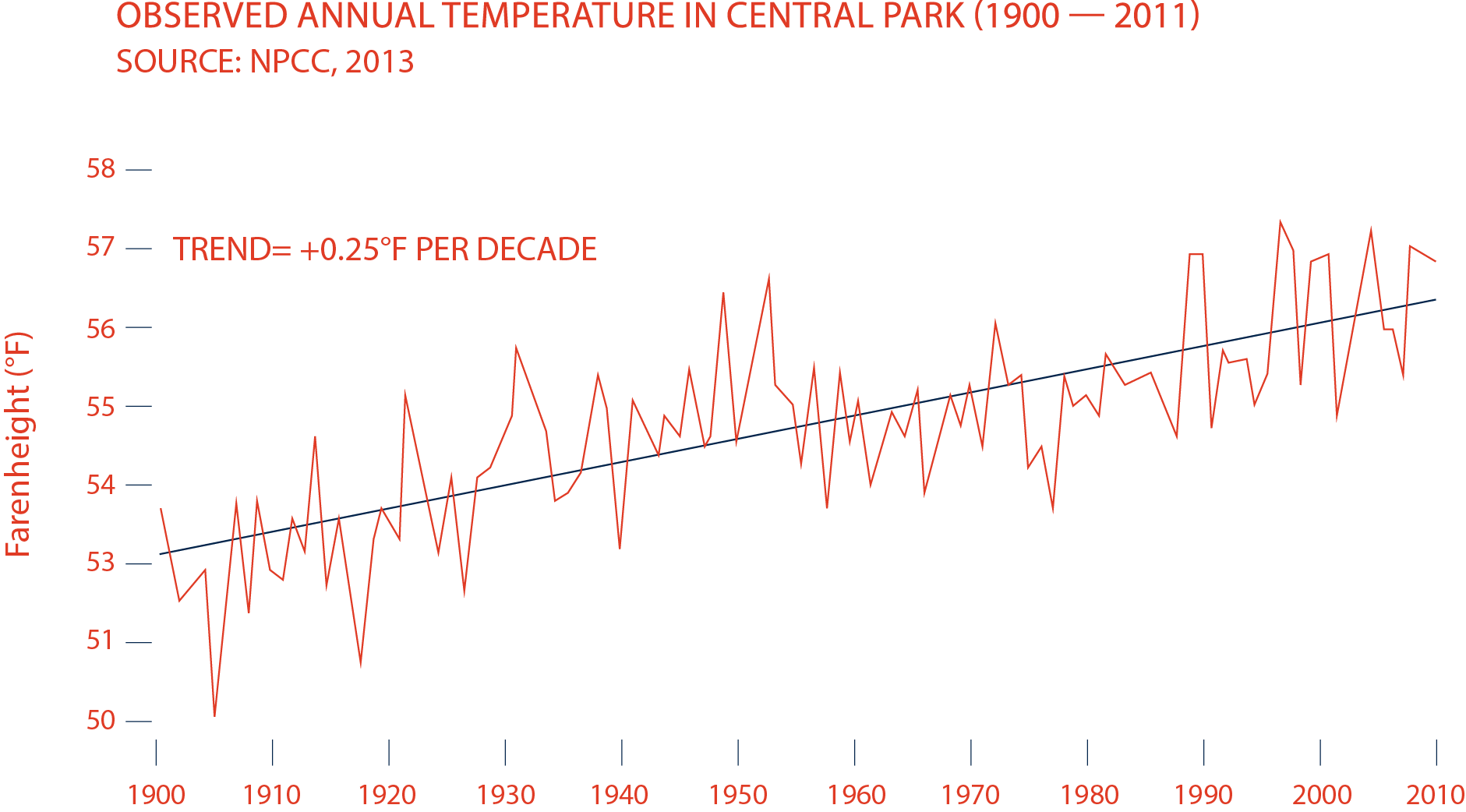 In the future, the number, duration, and intensity of heat waves at or above 90°F are expected to continue to increase as a result of climate change. These trends are discussed further in the Future Environment. In the future, the NPCC projects that New York City will experience between three to four heat waves per year, with an average duration of five days.

The built environment of New York City contributes significantly to the phenomenon known as the "urban heat-island effect." Heat islands develop in urban areas where formerly natural, permeable surfaces are now paved with asphalt or covered by buildings and other structures that absorb and retain heat. This condition slows the cooling process in the city, keeping nighttime air temperatures higher than temperatures in surrounding rural areas.

Waste heat that emanates from city air conditioners, vehicles, and other types of equipment also contribute to the urban heat island effect. The effect is most pronounced during summer nights, when New York City temperatures are, on average, seven degrees Fahrenheit warmer than the surrounding suburban areas. Under certain nighttime conditions, New York City can be as much as ten to twenty degrees warmer than the surrounding region.

The urban heat island effect also causes some neighborhoods to be warmer than others. Not surprisingly, areas with the highest building density (highest concentrations of heat-trapping built structures) and the least vegetation tend to have higher temperatures. The below thermal image of New York City reflects the temperature variation in different neighborhoods. Warmer locations are shown in orange and red, while cooler areas are shown in green and yellow. 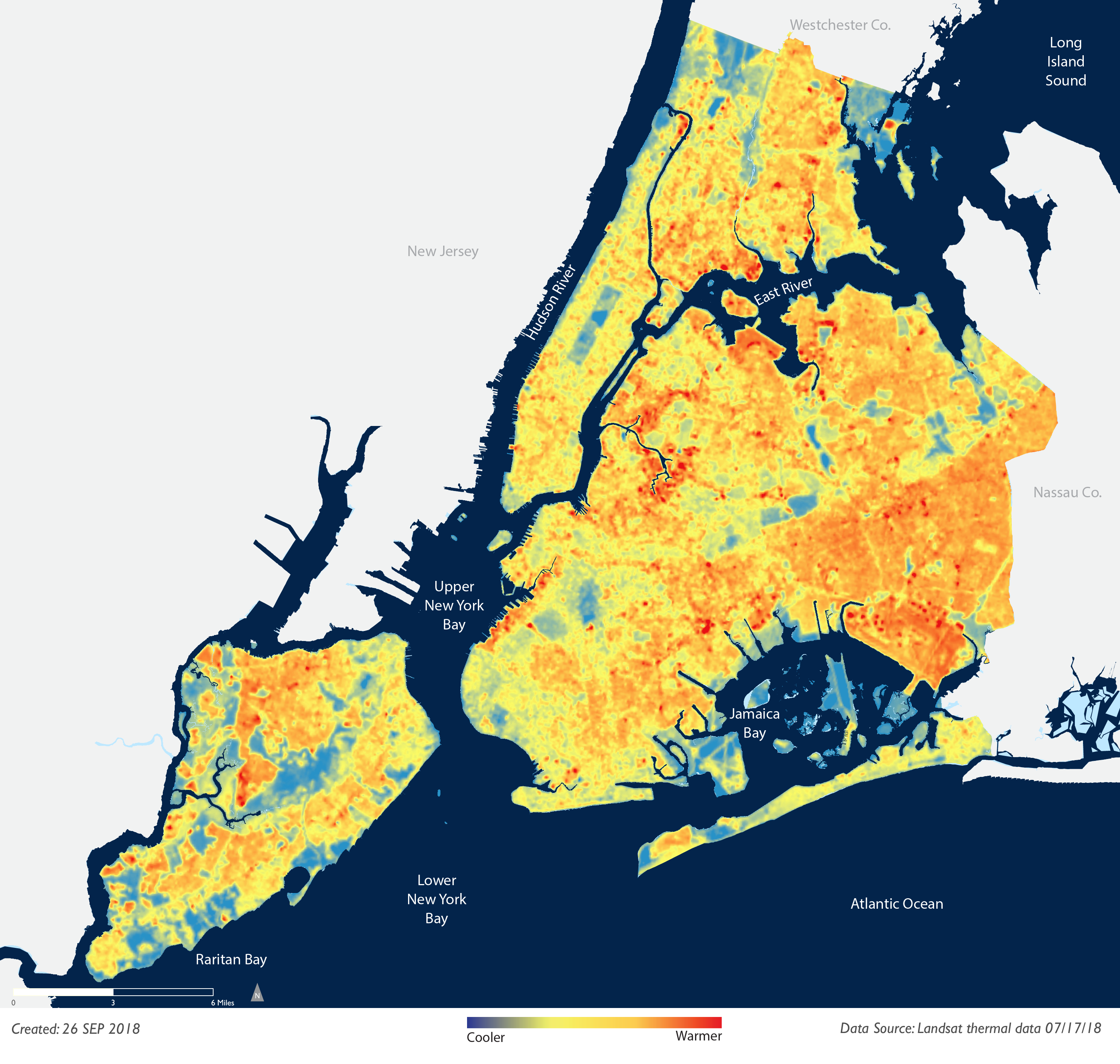 The second map displays the city's vegetative cover. Comparing the two images reveals that New York City hotspots are generally areas that lack any type of vegetation. New Yorkers living in these areas of the city are most exposed to high heat events, particularly among residents who do not have access to air conditioning.

Since the late 19th century, the number of days that New York City has experienced with temperatures of ninety-degrees or higher has increased. The NPCC report notes that climate scientists predict that by the 2050s, New York City could experience as many ninety-degree days annually as Birmingham, Alabama, does today – more than triple the 18 days we experience in an average year.

For more information on historic heat events, use the Hazard History and Consequence Database, an interactive tool developed for this website.