More heat-related deaths occur in New York City and the United States annually than casualties resulting from any other type of extreme weather event.

In addition to the physical danger, periods of extreme heat put pressure on New York City’s infrastructure. Heat waves cause people to increase their usage of air conditioning, which can strain the power grid and trigger power outages; power outages in turn, can lead to adverse health impacts.

Scientists predict that in the future, extreme heat events in New York City will increase in frequency, intensity, and duration. 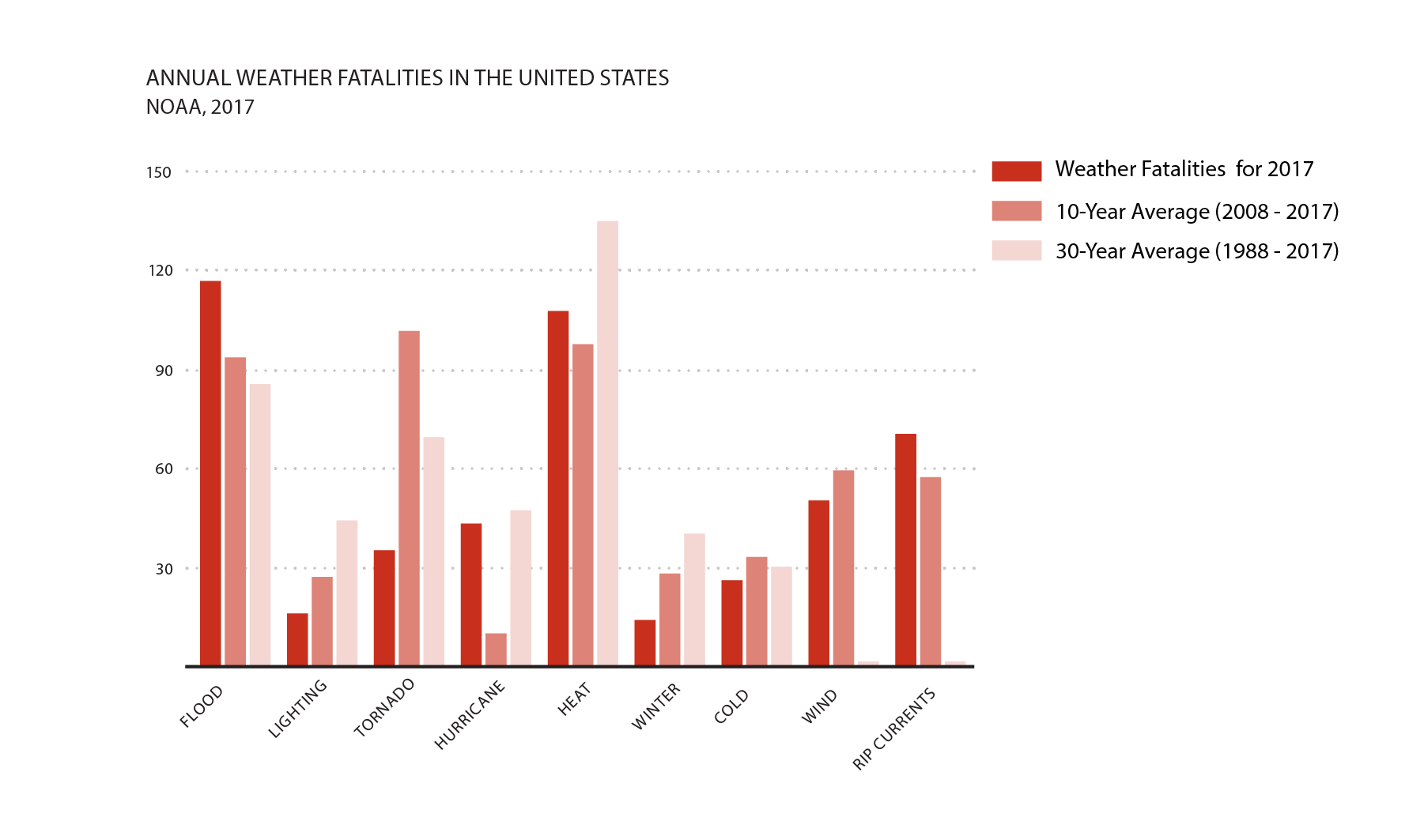 If a person has prolonged exposure to very high temperatures they can experience serious health problems, including dehydration, heat exhaustion, heat stroke and, in severe cases, death. Symptoms of heat exhaustion include confusion, dizziness, fatigue, nausea, headaches, and muscle cramps. Without proper treatment, heat exhaustion may progress to heat stroke.

Heat stroke, the most serious of heat-related illnesses, occurs when the body is no longer able to maintain a core body temperature in the normal range. Common symptoms include hot, dry skin; seizures; disorientation; and loss of consciousness. Heat stroke can cause complications in the central nervous system and permanent damage to the brain and other vital organs. In many cases, heat stroke can result in death.

Prolonged periods of heat can also exacerbate certain chronic conditions, particularly in people that are prone to renal, cardiovascular, and respiratory illnesses, which sometimes also result in death (see “Excess Deaths” further below).

Extreme heat can also produce an excess of natural-cause deaths, as defined here, by worsening underlying chronic health conditions, such as cardiovascular disease. Between 1997 and 2013, New York City averaged 115 annual excess deaths due to natural causes that were exacerbated by extreme heat.

Each summer in New York City there are an average of 13 heat stroke deaths, 150 hospital admissions, and 450 emergency-room visits for heat-related illness.

The neighborhood where a person lives may also be a factor in residents’ risk for heat-related illness or death during hot weather. People living in certain areas and communities in New York City may be at higher risk than others during periods of extreme heat.

The Heat Vulnerability Index (HVI) is based on an analysis of heat-related mortality in New York City and provides a measure of how at risk a neighborhood is during extreme heat events compared to other neighborhoods. 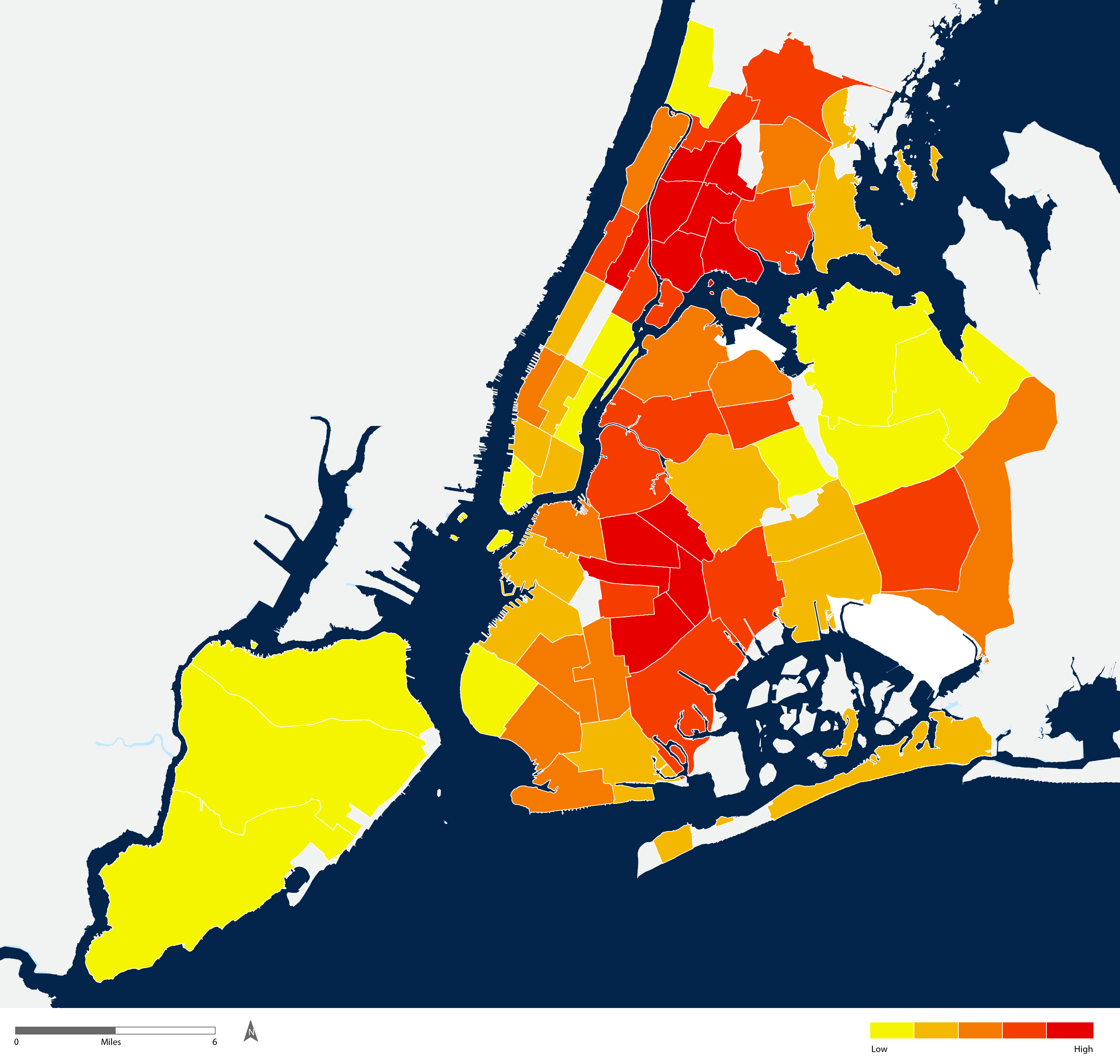 As shown, the New York City communities with highest vulnerability to death or illness during periods of extreme heat have the following characteristics of higher surface temperatures, less green space, and are poor communities of color whose populations have experienced historical disinvestment, racism, and segregation.

However, it is important to note that residents are still at risk for heat illness and death even if they reside in neighborhoods with low HVI scores. While some neighborhoods are more vulnerable to heat than others, there are vulnerable populations and individuals in every single neighborhood in NYC.

When energy demand is high during heat waves, power outages can occur – a situation that can put certain members of the community at risk. Power outages create risk for anyone who relies on life-sustaining medical equipment, oxygen concentrators, rechargeable motorized wheel chairs, and refrigerated medications, as well as certain at-risk groups who require air conditioning to stay safe during heat waves.

If pharmacies cannot operate due to a power outage, anyone relying upon them to refill necessary prescriptions is placed at risk.

If building elevators become inoperable during power outages, people with disabilities or access and functional needs are at greater risk because they may be unable to obtain the goods and services that they need.

Architecture and infrastructure can each contribute to New York City’s extreme heat risk.

People who live and work in New York City can be placed at higher risk of heat related illness if their building’s architecture traps heat, limits ventilation, or if the cooling systems do not work or are absent entirely.

A building’s construction materials can affect its internal temperature, potentially increasing the heat for workers or residents. Factors that can affect a building’s internal temperature include - the amount of air that escapes through gaps or cracks in the walls, the amount of insulation in the walls and roofs, the type and size of windows, and the materials with which a building is constructed.

Glass transmits heat far more readily than materials like brick, masonry, and wood. Thus, on a hot day, windows can create an internal greenhouse effect. During an extreme heat event, all-glass buildings and single-family homes that are exposed on all four sides tend to heat up the most. Conversely, row houses that share walls with their neighbors and masonry buildings with thicker walls are typically at a relative advantage in terms of heat.

A building’s age can also affect internal temperatures; older buildings may not have as much insulation as current codes require, allowing more hot, outside air to enter the building. Or, older buildings whose electrical systems are not up to current codes may not be able to support the electrical load needed to run air conditioners. During an extreme heat event, these factors can allow the temperature to increase rapidly in a building.

In addition to trapping hot air inside buildings, certain building materials can increase local temperatures outside. For example, asphalt roofs, adjacent parking lots, or mechanical systems that pump out heat or hot vapor into sidewalks, can all produce and trap heat that is felt outdoors at street level.

The Grid and Risk of Power Outages

A period of extreme heat in New York City increases the population’s reliance upon air conditioning -- a necessary health safeguard for people in certain at-risk groups during hot weather. However, reliance upon air conditioning during a heat wave increases the demand for electricity. If demand outstrips the power grid’s capacity to supply electricity, the population is at risk from power blackouts. New York City’s utility providers understand that they must take precautions to reduce strain on the system and avoid blackouts. To help manage these risks, New York City advises the public to set air conditioning at 78°F or low cool. This enables residents to maintain a healthy and comfortable indoor environment, lower their electricity bills, and minimize strain on the electric grid. Not only does excessive heat reduce energy efficiency, but it can physically damage electric generation, transmission, and distribution infrastructure; as more electricity flows through these systems to meet higher demand, the systems are increasingly stressed. Power lines can overheat and short circuit, potentially causing power outages. Heat can also cause overhead electric and telecommunications lines to sag and if lines sag onto trees, there is a risk that they may short circuit and cause an outage.

Power outages can have severe, pervasive impacts both on people and the built environment. If there is no backup power, they can shut down all types of equipment that are plugged into the grid including air conditioners, elevators, electric pumps that distribute water to the upper floors of high-rise buildings, refrigerators, freezers, and computers. People who depend upon life-sustaining medical equipment, oxygen concentrators, rechargeable motorized wheel chairs, and refrigerated medications are especially at risk. Certain at-risk groups who require air conditioning to stay safe during heat waves are also at increased risk.

Extreme heat poses a risk to the extensive network of ground transportation infrastructure serving New York City. For instance, high temperatures can cause railroad tracks, wires, and pavement on roads and bridges to crack, buckle, or sag. These effects can result in service disruptions, hazardous travel conditions, and costly repairs.

Another risk stems from people illegally opening fire hydrants to use them as sprinklers to cool off. If this occurs, the water pressure can drop throughout the system. This could reduce firefighting capabilities and increase risk for first responders and citizens who find themselves in life-threatening situations.

It is difficult to determine whether the extreme temperatures alone present any direct risk to the natural environment in New York City, since heat waves are naturally occurring weather events. Human activities and New York City’s dense built environment exacerbate the amount of heat here, but do not directly cause the problem.

Secondary hazards associated with extreme heat are poor air quality and drought, which put New York City’s natural environment at risk. Periods of hot weather trigger increases in energy use, which in turn contribute to higher emissions of pollutants and greenhouse gases.

Long-term temperature changes from an increasingly warmer climate may cause shifts in habitat and cause some local species to go extinct if they are not adapted to withstand long stretches of extreme heat or cold. In terms of short-duration extreme temperature events, it is still uncertain what impacts this may have on the natural environment, if any.

The U.S. Environmental Protection Agency Air Quality Index (AQI) was created to correlate levels of different pollutants to a single scale. The higher New York City’s AQI value on the scale, the greater the health concern. The Bureau of Air Quality Surveillance is responsible for the operation of the various ambient air quality monitoring networks for the State.

When levels of ozone and/or fine particles are anticipated to exceed an AQI value of 100, New York State Department of Environmental Conservation and the State Department of Health issue an Air Quality Health Advisory to alert people with high sensitivity to take necessary precautions. When ozone levels are projected to reach the unhealthy range, people are advised to limit vigorous outdoor physical activity during the afternoon and early evening hours.

Scientists predict that in the future, extreme heat events in New York City will increase in frequency, intensity, and duration. This table, adapted from the 2015 New York City Panel on Climate Change (NPCC), illustrates this projected change through the middle of the 21st century. These projections are relative to the period of 1971-2000, and include a middle-range estimate (25th-75th percentile) and a high-end estimate (90th percentile).

Compared to the number of heat waves that New York City experiences annually, these projections estimate that this area will have up to one to two heat waves more per year by the 2020s, and up to three to five heat waves more per year by the 2050s. On average, the NPCC estimates that New York City’s heat waves will last one to two days longer. As the climate changes and warms, extreme heat events are expected to become more common during May and September, the peripheral summer months.

The combination of an increased number of heat waves and the projected changes in New York City’s demographics (such as an increase in its over 65 age population) are likely to lead to higher rates of temperature-related mortality and illness during high-heat events in the future.

A 2013 study published in Natural Climate Change projects that the rise in the number of heat-related deaths in Manhattan will continue to increase sharply throughout the 21st century. Using data from the 1980s as a baseline, the study projects a 37 to 49 percent increase in heat-related deaths by the 2050s and a 50 to 91 percent increase by the 2080s. The range in these studies reflects two different population growth and adaptation, and mitigation scenarios. It should also be noted that the 2050s projections had high uncertainty in terms of the greenhouse gas emissions.