Pandemics will impact some people more than others for a number of reasons. First, some people can be immune because of some similarity between the pandemic virus and older viruses people may have been exposed to. Second, there will always be people who are more likely to be severely impacted by the disease if they are infected – usually people with underlying medical conditions, pregnant women and older people – people in “traditional” risk groups. However, precise risk groups vary from one pandemic to another. Until a respiratory pandemic strikes, we will not know for certain who the most at risk will be. Unlike seasonal influenza, which typically impacts the very young and very old, pandemics can affect school-aged children and working adults. Early detection and robust epidemiological investigations are needed to determine who will be the most impacted by the particular strain.

Studies of pandemic influenza have shown that some populations are more susceptible to infection or significant illness than others. Infection rates may be highest in school-aged children (as much as 40 percent) who are often the biggest transmitters of influenza viruses in the community. The World Health Organization (WHO) considers the following populations to be at higher risk for negative medical outcomes (such as significant illness, hospitalizations, or death) from pandemic influenza: pregnant women, children, and seniors (aged 65 years or older), individuals with chronic health conditions, and healthcare workers. Certain physical and health conditions make some populations more vulnerable to pandemic influenza, and societal factors can also amplify the risk of disease spread. DOHMH conducted a study to identify areas of clustered population groups most vulnerable to a pandemic in New York City. The study was based on a model of vulnerability that examined how income, race, and other social attributes influence exposure, susceptibility, and access to treatment during an outbreak.

Vulnerability to pandemic influenza is based on: 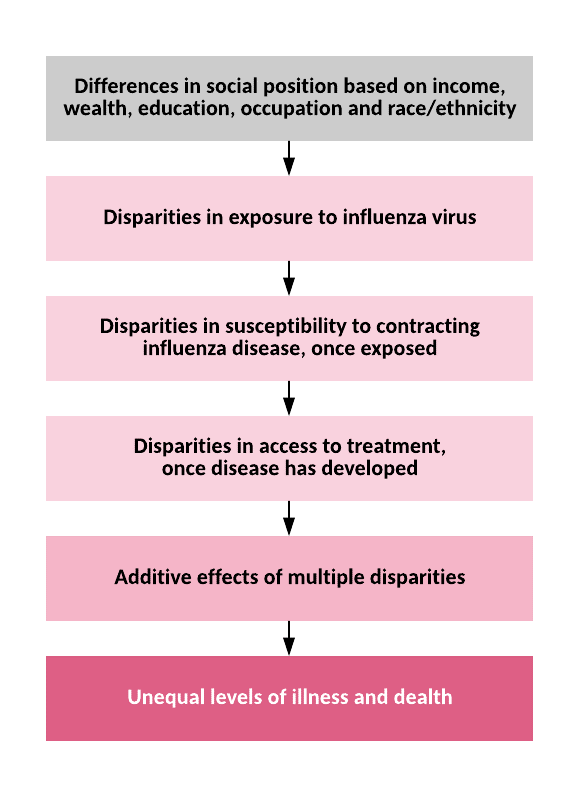 Exposure. Transmission of pandemic influenza is typically airborne, but the flu can also spread through direct and indirect contact. Low-income populations may be more vulnerable to exposure to the virus than other groups because they are more likely to experience crowded living conditions and workplaces and tend to depend on public transportation. Because frequent contact with infected populations increases the risk of exposure, healthcare providers, caregivers, and first responders are especially vulnerable. Susceptibility. The elderly, very young, and people with pre-existing conditions such as diabetes, cardiovascular disease, or HIV are more susceptible to negative outcomes from an influenza infection. Environmental stressors and social behaviors including high-stress work environments, poor or unsafe housing, drug addiction, or alcoholism can increase the likelihood and severity of infection. Access to treatment. Lack of access to treatment may also increase vulnerability. In general, uninsured, low-income populations, immigrants, and people with disabilities have less access to care and treatment. People unwilling or unable to get vaccinations or to obtain care if needed may be more vulnerable to severe medical complications. 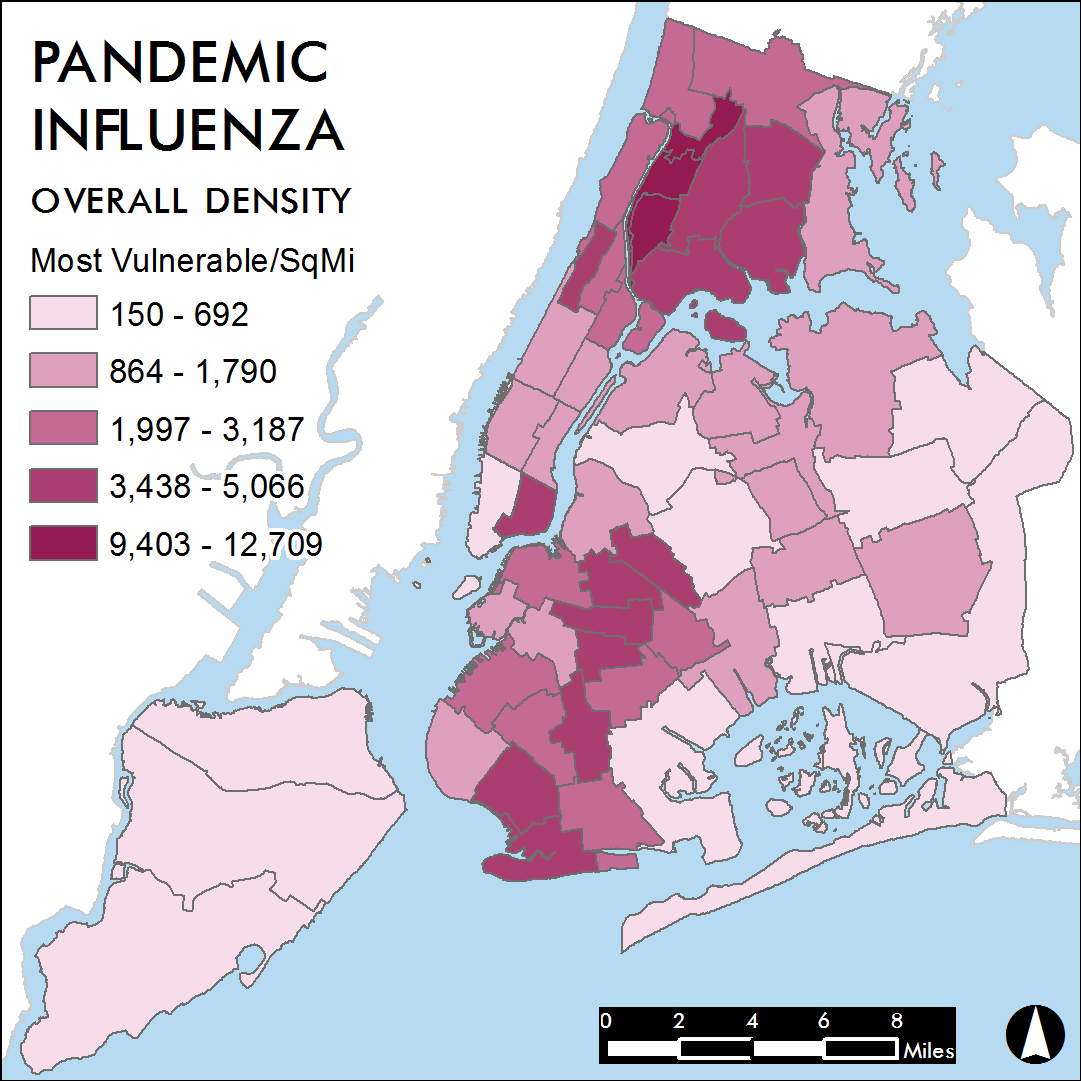 The Health Department identified population clusters vulnerable to pandemic influenza outbreaks in New York City based on its analysis of exposure, susceptibility, and access to treatment. Clusters of those most vulnerable to a pandemic are found in Southwest Bronx, Morningside Heights, Chinatown and the Lower East Side, Bedford-Stuyvesant, East New York, Crown Heights, and Coney Island.

The Potential for Communities to be Targeted

Regardless of the origin of the disease, pandemics often lead to communities being unjustly singled out by others as “responsible” for the disease based on perceived associations like a virus’ country of origin or community where it was first identified. Clear and consistent risk communication is essential to dispel myths before they take hold. “In 2003, hundreds of Canadians fell ill with SARS after a Toronto resident returned from Hong Kong infected with the virus. In the panicked hysteria that followed, Asians of all stripes-whether they had traveled abroad or not-found themselves singled out for social exclusion. Chinese Canadians were shunned on the subway. White Canadians pulled their jackets over their faces when passing Asians in hallways and wore masks in their offices if they had Asian coworkers. Families told their children not to play with Asian kids at school, employers withdrew job offers to Asian candidates, and landlords kicked Asian families out of their homes. Losses to Chinese-owned businesses reached up to 80 percent.” – From Pandemic, Sonia Shah

Impact on the Healthcare System

In a severe pandemic, competing demands on resources, long-duration impact, and potential staff illness contribute to very limited options for importing resources or transferring patients. Most models of severe pandemics predict that current and surge capacities for critical care would be exceeded.

Biological hazards are an inherent danger to living organisms but generally do not pose a significant threat to the built environment.

Little research exists on the impact to the environment from a respiratory virus pandemic. The largest impact will likely be from the increase in antivirals and antibiotics (for any further complications of the virus) prescribed to treat the disease. These drugs are excreted into wastewater in a biologically active form, which presents a new and potentially significant ecotoxicologic challenge to microorganisms responsible for wastewater nutrient removal in wastewater treatment plants and receiving rivers. A mild pandemic is likely to have negligible impact on the environment. However, a severe pandemic might result in the discharge of insufficiently treated wastewater into receiving rivers, thereby increasing the risk of contaminated waterways. Widespread drugs in the environment could also hasten the generation of drug resistance.

Pandemics are unpredictable and spread rapidly – due to modern air travel, a new virus could reach New York City within six weeks from anywhere in the world. Possible pandemic diseases are being monitored globally by the World Health Organization (WHO), the Centers for Disease Control and Prevention (CDC) and other national and international public health organizations for their potential to develop into a pandemic.

Global disease surveillance and robust field investigations are needed for early detection of a global disease outbreak before it reaches the City. Recent budget cuts to the CDC’s global health security initiatives have significantly decreased the City’s ability to know beforehand about an approaching pandemic and prepare mitigation efforts that could decrease the impact to the City.