WHAT IS THE HAZARD?

New Yorkers all recognize that they have to battle high winds from time to time, but not all high wind events are caused by the same types of weather systems.

Hazardous high-wind events can occur from tight pressure gradients, strong frontal systems, nor’easters, hurricanes (note: nor’easters and hurricanes are discussed in the Coastal Storms profile) and severe thunderstorms, which may produce straight line winds or tornadoes. High wind events may or may not be accompanied by precipitation and can vary in geographic extent, intensity, and duration. For example, events can range from short bursts of high-speed winds, such as with a severe thunderstorm, to longer periods of sustained winds from events such as a hurricane. Severe thunderstorms typically have less than an hour of warning lead-time, but Nor’easters, tropical cyclones, and other types of high wind events usually have several hours to a few days of warning lead time.

New York City is subject to various high–wind events that each have different characteristics, as shown below.

Depending on the type of high wind event affecting New York City the National Oceanic and Atmospheric Administration (NOAA)  uses two different scales to describe the event -  Enhanced Fujita is used to classify the severity of tornadoes and Beaufort is used to classify the intensity of wind speed. Each associates higher numbers on the scale with higher levels of property damage.  The size of hailstones and wind gust speeds can also be used to measure the severity of thunderstorms.

A severe thunderstorm produces wind gusts of 58 mph or more and/or hailstones of 1 inch or more in diameter.

Hailstone size varies widely, and the size correlates with the severity of the thunderstorm. 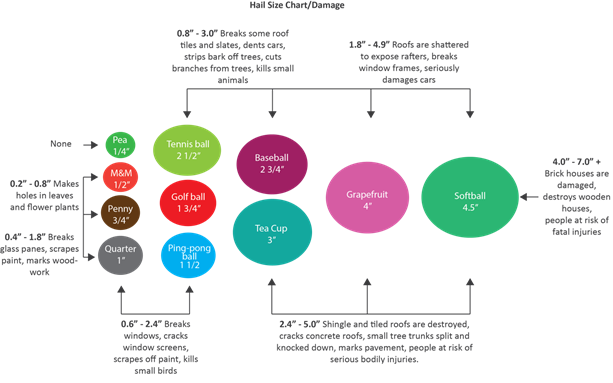 The EF-scale is more complex than the F-Scale and enables surveyors to assess tornado severity with greater precision. However, the F-Scale is still used to place the more recent high-wind events into the historical context.

NOAA’s chart compares these two scales and indicates the severity of damage associated with these rankings.

The Beaufort Wind Scale is used to associate observations made during wind events with different levels of wind force and speed.

High winds and severe weather frequently affect New York City. Based on the frequency of these events in the past, the hazards associated with high winds are highly probable in the future.

New York City estimates the probability of future high-wind events based upon the annual frequency of past severe thunderstorms. From 2000 to 2017, New York City’s Hazard History and Consequence Database indicates that the city has had 209 severe weather events, including events where there were high winds, hailstones, lightning, macrobursts, and tornadoes. Of the 209 severe weather events tallied in the Hazard History and Consequence Database, 24 events produced hailstones ranging from 0.25 inches to 2.75 inches in diameter. Generally, the reported hailstone size was small, but 15 events produced hailstones of more than 0.75 inches in diameter.

The probability of future severe storms and damaging winds in New York City is high and such events may happens multiple times on a local scale each year. By comparison, the recurrence interval for tornadoes and large hail in New York City is much lower.

Tornadoes in New York City are less common than severe thunderstorms, but they are still likely to occur in the future.

New York City’s first reported tornado was in 1974.Over the past 40 years, twelve tornadoes appeared in New York City, with eleven ranked at low severity levels of F0 or F1.

Reports of tornadoes have increased in New York City over the years. Seven tornadoes have been reported between 2007 and 2018, compared with only six reported in the previous 33 years. This increase in reported occurrences may be due to the greater precision of the Enhanced Fujita Scale.

Based on the historical record, New York City experiences at least one of these high-wind events per year.

New York City is located in an area of the United States that FEMA classifies as susceptible to all types of high winds events. 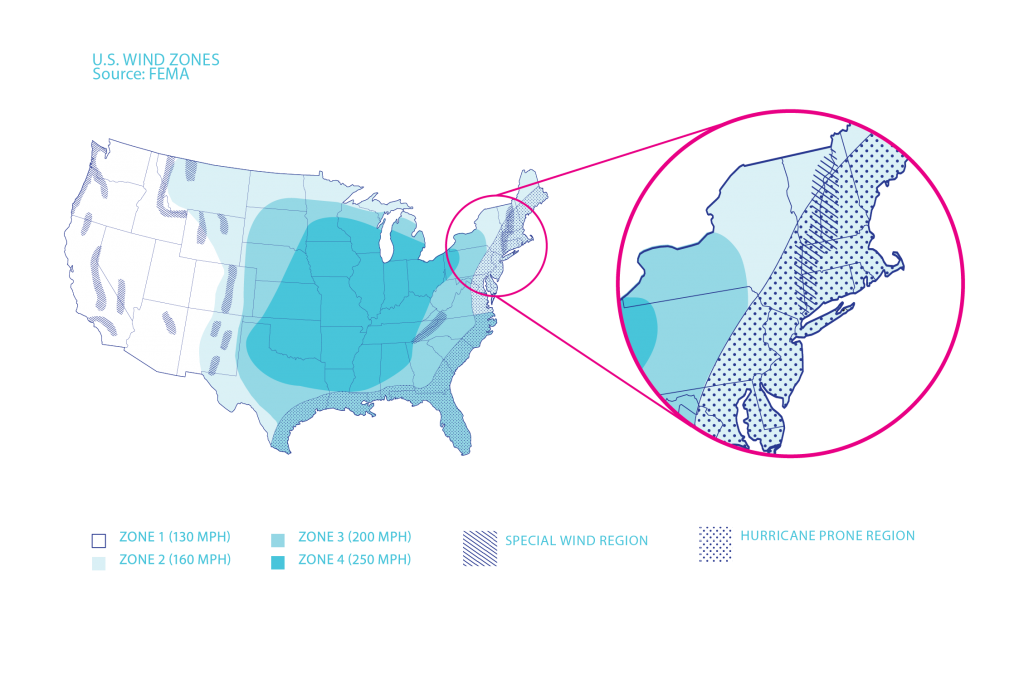 In the New York City metropolitan area, no single part of the city is more susceptible to high-wind hazards than another. This assessment is based on the historical record of where high-wind events have occurred.

Thunderstorms occur throughout New York City, but they do not necessarily affect all five boroughs simultaneously or produce high winds or hail that affect every location with the same severity. Some thunderstorms and their associated wind and hailstorms are extremely localized events.

A common misconception is that tornadoes do not occur in dense urban areas such as New York City. Scientists say that although tornadoes are rare, they could occur in any part of the city.

Since 1950, at least one tornado has occurred in each of the five boroughs, as shown on this map. Note that Manhattan’s August 1995 tornado is not plotted because accurate coordinates for this event are unavailable. 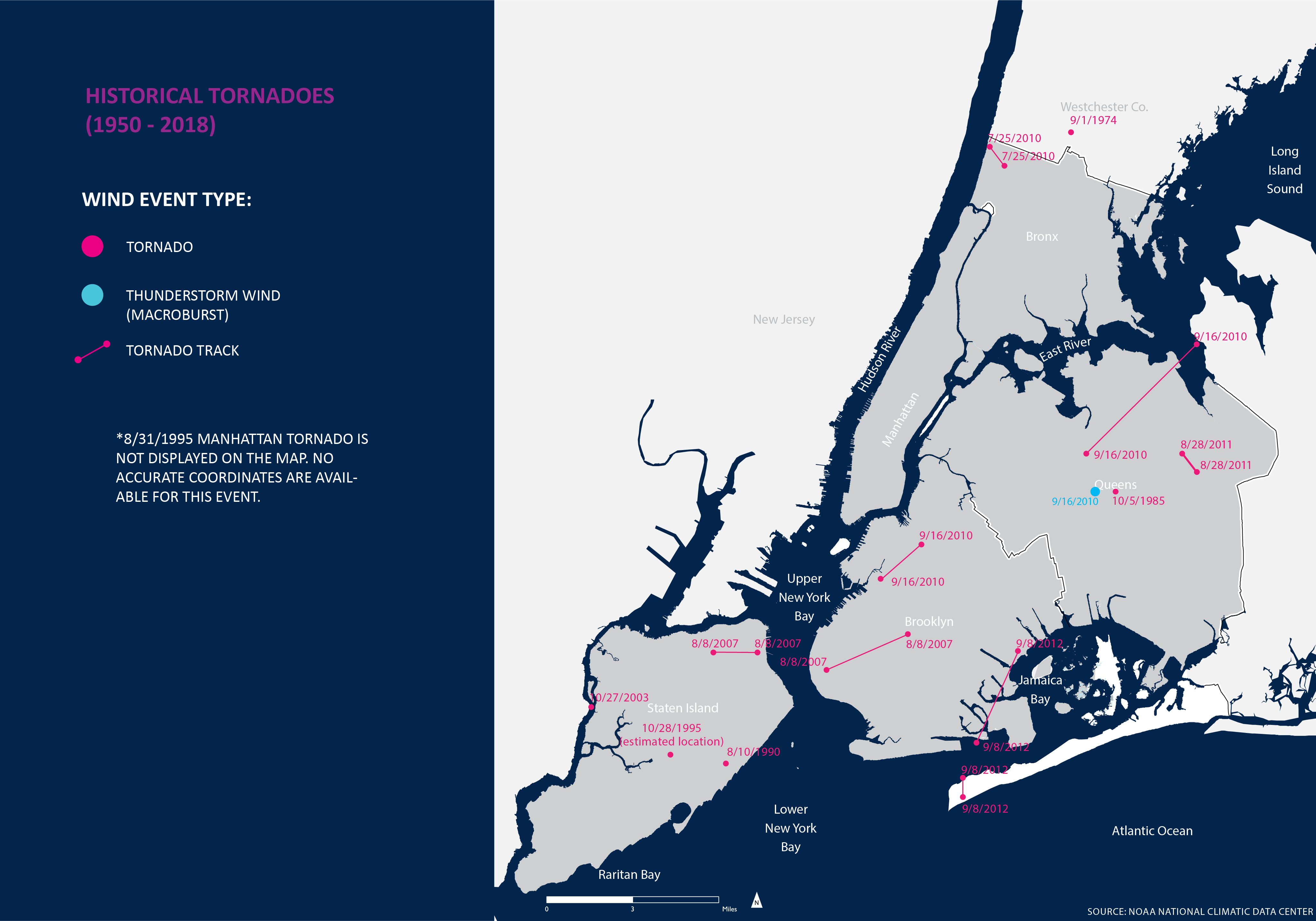 Between 1974 and 2013, New York experienced many non-thunderstorm high-wind events and severe thunderstorms, which produced damaging wind and tornadoes. Two events produced conditions so hazardous that they received Presidential Disaster Declarations.

For more information on high wind events, use the Hazard History and Consequence Database, an interactive tool developed for this website.