WHAT IS THE RISK?

For example, anyone caught outdoors during a severe weather event such as construction workers, other people who work outdoors, and homeless people are more vulnerable to injury and death. People are at risk from injury or death from hailstones, which can fall at speeds faster than 100 mph. Trees can also pose a risk during high wind events, causing injury or death if they or their branches fall on people or property.

Data on the number of deaths and injuries from high-wind events in New York City demonstrate this risk. From 1996 to 2012, the NWS Storm Events Database records show that there were at least 13 confirmed deaths and 69 injuries during New York City’s 263 severe weather events and lightning strikes.

If high winds damage property or cause injury, members of vulnerable populations and those with constrained finances are particularly at risk; these populations may not be able to rebound as quickly as other segments of the population.

In addition to potentially injuring people, downed trees can also disrupt utility wires, which can lead to power outages that put people and property at risk. Power outages can disrupt normal activities and increase risk for individuals whose lives depend on a sustained power supply including people who are on life-support equipment or medical institutions that need refrigeration for medical supplies.

Locally, the damage to New York City from high winds is also significant. Since 2000, New York City has had three storms in which tornadoes created such extreme damage that FEMA responded by awarding Individual Assistance and Public Assistance grants.

A more extensive discussion of the risk and structural vulnerability of New York City’s built environment is included in another section of this report -- the NYC Hazard Environment.

Although the 1938 Building Code addressed high wind loads for skyscrapers and other buildings taller than 100 feet, these older requirements are not as stringent as today’s building codes and may not address higher wind loads for hurricanes. Approximately two-thirds of all New York City buildings were constructed prior to the 1938 code and were designed according to principles that did not explicitly incorporate wind design. 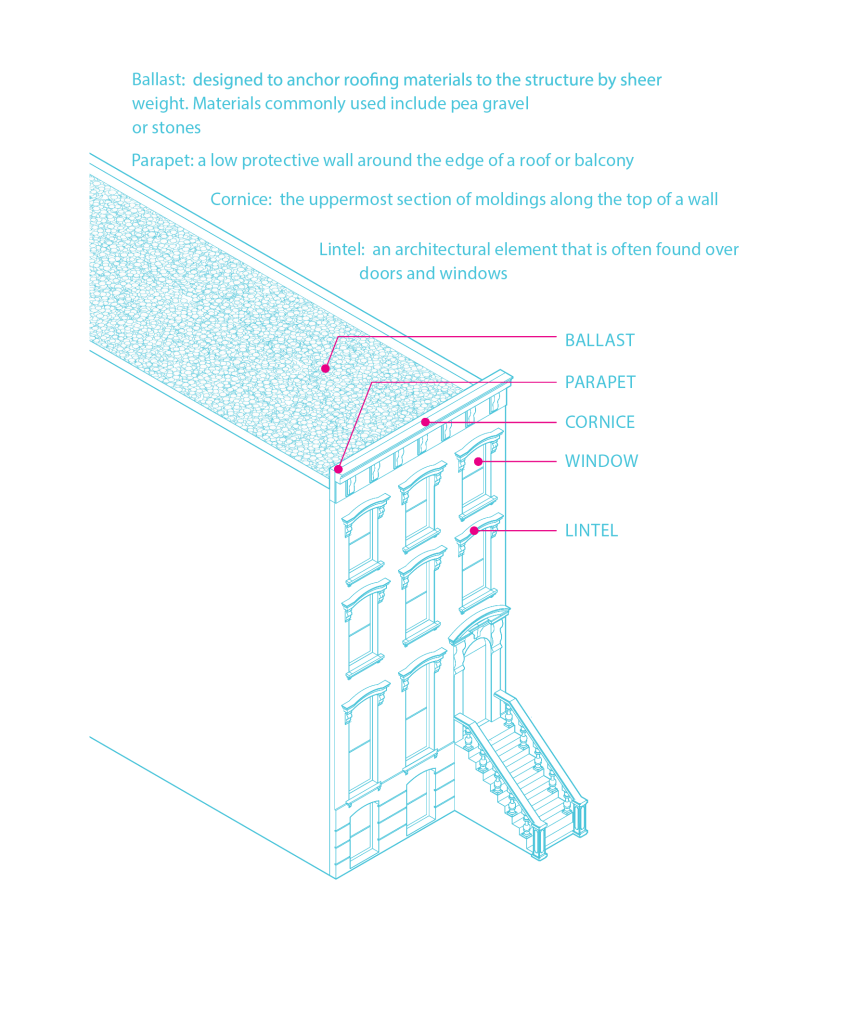 According to Urban Green Council, New York City has approximately 60 older commercial high-rise buildings constructed in accordance with the 1938 code that still stand. Although they were built according to the design requirements of the 1938 code, their modernist glass and metal envelopes could still be at risk during high wind events.

Façade elements of historic buildings are also at risk during high wind events, particularly six-story masonry structures with poorly maintained masonry parapets and cornices. Street facades on typical brownstones are also vulnerable, because these types of buildings are often poorly attached to the party walls, risking a collapse during a high-wind event.  If the street facades do collapse, pedestrians below are at high risk. Potentially fatal injuries can occur if cladding is not securely attached and components, such as parapets, cornices, lintels, and roof coverings, and fall to the street level below.

In addition to the age of a building, certain types of building construction are more structurally vulnerable. For example, steel and concrete structures are engineered structures and as such are more resistant to high winds, compared to empirically built, wood-frame structures, which are at greater risk. In New York City, close to 70 percent of all buildings are wood-frame structures. Among the boroughs, Staten Island has the highest percentage of wood-frame buildings.  With 92 percent of its structures made of wood, Staten Island’s built environment is highly vulnerable to damage caused by windstorms and tornadoes.

In New York City’s dense urban environment, flying debris poses a substantial risk. Window glass that breaks during high winds can damage a building’s contents and cause injuries inside and out. Windows and doors that fail, are broken, or are blown wide open due to high wind can greatly increase storm damage.

Some older buildings in New York City use loose stone, aggregate, or gravel as roof covering. These materials can become dangerous projectiles during a high-wind event, injuring people and damaging surrounding buildings.

Risk in New York City is exacerbated by the “urban canyon effect.” This phenomenon can modify the speed and direction of winds in cities with high concentrations of tall buildings, and relatively narrow streets such as Midtown Manhattan, the Financial District, and Downtown Brooklyn. Large buildings in these areas are not at risk, because they are designed to withstand hurricanes. However, smaller buildings in these neighborhoods can be at greater risk of damage, because they may not be specifically designed to accommodate the increased wind speeds and resulting higher wind loads that are the effect of canyons or presence of a high-rise urban environments.

Thunderstorms may also have secondary impacts on New York City’s natural environment such as lightning-induced fires and hazardous material spills or leaks. The latter may occur due to torrential rains mixing with hazardous materials if such materials are not properly contained.

A more extensive discussion of the risk to New York City’s natural environment from high winds is included in the Hazard Profile on flooding.

Flooding – What is the Risk?

Predicting the impact of high-wind events on the future environment is complex and varies by the type of weather event. Some of the impacts of climate change are warmer weather and moister air, which can create an environment favorable for severe thunderstorms, nor’easters, and tropical cyclones, but there may be unforeseen impacts that could limit the frequency of these events. At this point, it is unclear how the long-term effects of climate change will impact the strength and occurrence of high wind events.