Extratropical cyclones, the most frequent type of storm in the Northeast, commonly cause rain, snow, and wind that combine to create severe winter weather storms that threaten New York City.

Temperature differences between the subtropics and the polar regions cause these frontal storm systems. The storm’s surface wind strength is primarily determined by surface pressure gradients created between the low pressure of the storm and surrounding area of high pressure.

Subgroups of extratropical cyclones include Nor’easters, winter storms, blizzards, and bomb storms (storms that intensify rapidly). In addition to storms, periods of extremely cold temperatures also present a risk to New York City throughout the winter.

Several types of winter-weather conditions have the potential to affect New York City.

The hazards inflicted upon New York City by winter storms can be significant.  Snow and ice hazards can compromise public safety and health and prevent the normal, day-to-day functioning of infrastructure and services. Snow accumulations that block roadways, public transit infrastructure, and sidewalks impede people and vehicles’ mobility and access to critical services and places of work. Snow accumulation is hazardous when it damages overhead power and telecommunications lines, and its weight causes trees and limbs to fall onto roofs and vehicles.

All types of wintry precipitation – snow, sleet, and freezing rain – contribute to hazardous travel conditions, although freezing rain is considered among the most treacherous, since it falls initially as rain, but freezes on contact with a surface, forming a glaze of ice.

Winter storms are also especially hazardous for people who work outdoors, the homeless population of New York City, people with inadequate heat at home, children traveling to school, and seniors and other vulnerable populations.

As the temperature drops and wind speed increases, heat drains from people’s bodies more rapidly than normal, creating a "wind-chill effect" that can make people feel even colder than the actual temperature.

This National Weather Service (NWS) wind-chill chart shows the temperature that a person feels on their exposed skin due to the combination of falling air temperature and increased wind speed. As shown, hazard of frostbite increases as people’s exposure to freezing temperatures and bitter wind increases. 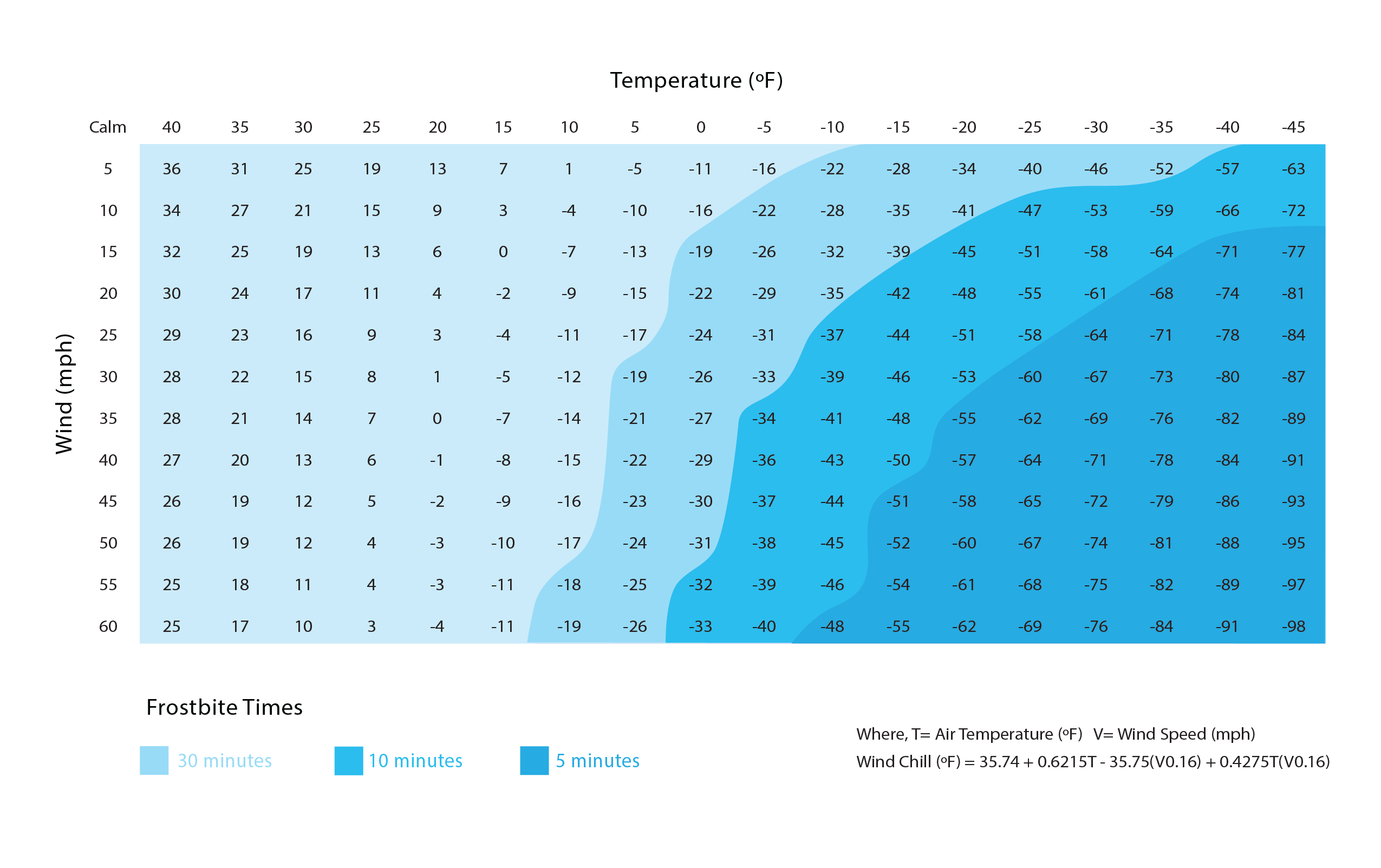 The severity of a winter storm depends on the temperature, its wind speed, the nature of associated precipitation, its rate of accumulation, and its timing. For example, a storm that occurs in early winter, when leaves are still on the trees, has the potential to cause more trees and power lines to topple as the extra snow and ice accumulate on the tree leaves or poles and weigh them down.

El Niño and La Niña are two parts of a natural climate cycle that affect winter weather -- the warm and cool phases of a recurring climate pattern across the tropical Pacific. The pattern can shift back and forth irregularly every two to seven years. Each phase can trigger predictable disruptions of temperature, precipitation, and winds that have the potential to intensify winter weather affecting New York City.

Historically, El Niño events are more likely to intensify warm-weather events in the Northeast, whereas La Niña events are more likely to affect colder weather events there. Predicting the potential impact of El Niño and La Niña is complicated due to the variability of other natural weather phenomenon that affect temperature and weather in the Northeast, such as the cycles of the North Atlantic Oscillation and Artic Oscillation.

Winter storms are classified by meteorological measurements and their societal impacts.  The Northeast Snowfall Impact Scale (NESIS), a post-event classification, characterizes and ranks high-impact Northeast snowstorms – those with large areas of snowfall accumulations of 10 inches and more – on a scale of one to five.

The National Climatic Data Center developed the NESIS scale to indicate the impact that Northeast snowstorms might have upon the transportation systems and economy of the region and potentially the rest of the United States. The NESIS index is different from other meteorological indices, because it incorporates population data and meteorological measurements to assess a storm's overall societal impact.

NESIS scores are derived from the size of the area affected by the snowstorm, the amount of snow accumulation, and the number of people living in the path of the storm. Snowfall and population factors are combined into an equation that calculates a NESIS score, which is associated with a range of storms, classified from small to extreme. Storms generating heavy snowfall over large areas that include major metropolitan centers would generate raw scores with the highest values.

The raw score is then converted into one of the five NESIS categories -- Notable, Significant, Major, Crippling, and Extreme.

Since 1798, New York City has experienced 19 snowstorms with snowfall totaling 16 inches or more. When the data from these historic storms was analyzed via NESIS, only one storm was classified as extreme. Of the remaining storms on the list, five were classified as crippling, five as major, one as significant, and one as notable. Data from the remaining six historical snowstorms did not generate a sufficiently high value to qualify for a NESIS rank.

Winter storms are frequent occurrences in New York City. Based on historical frequency, New York City is likely to experience a winter storm with snow accumulation of 16 inches or more approximately once every nine years.

Historically, there are only a few reported instances of thundersnow in New York City. However, the most recent thundersnow event occurred here on March 7, 2018. Thundersnow events are less likely to occur in extremely cold winter months than in warm-weather months.

According to the New York City Panel on Climate Change, the city currently experiences an average of 72 days per year with temperatures at or below 32°F, which could decrease over the next several decades.

All areas of New York City are susceptible to winter storms. However, during these events, snowfall totals can vary widely across the city. For example, during the winter storm on December 26 and 27, 2010, snowfall ranged from 13 inches in Queens to 29 inches on Staten Island .

New York City generally experiences less severe cold than other places in the greater metropolitan area for two reasons -- the urban heat-island effect  and its proximity to the ocean. Areas near shorelines often have slightly warmer temperatures during colder months than inland areas. However, even with warmer temperatures in coastal areas, strong winds near the shore can still create hazardous wind-chill conditions that affect residents.

Neighborhoods in New York City with relatively low population density, lots of trees and natural ground cover, and low amounts of heat-absorbing asphalt typically remain a few degrees cooler than other neighborhoods in summer months, but this warming effect is less pronounced during colder winter months.

New York City has experienced a range of major winter storms from 1798 through January 2018. For more information on winter weather events, use the Hazard History and Consequence Database, an interactive tool developed for this website.

Over the last 25 years, three winter snowstorms and blizzards were sufficiently damaging to earn presidential disaster declarations for New York City and the surrounding region:

Although the Blizzard of 2016 is remembered for the hazards caused by over 30 inches of snowfall, a secondary hazard created by this winter weather event is worth noting. This January winter storm, also called Winter Storm Jonas, occurred during spring tide, which contributed to moderate storm surge and flooding in coastal areas throughout the region.

This graphic compares the cumulative height of the water during Hurricane Sandy with the impact of Winter Storm Jonas and other historic coastal storm events. 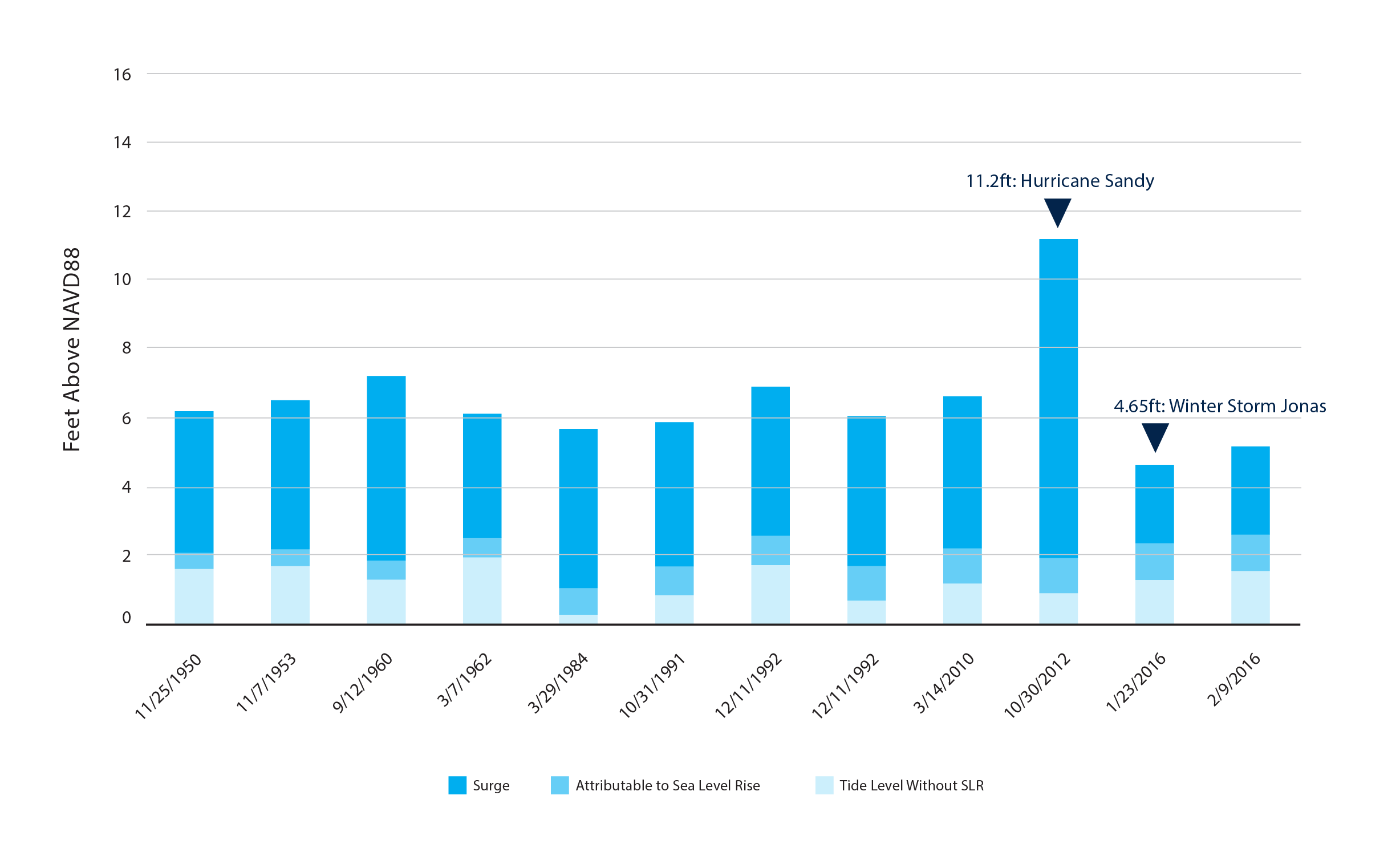 Although the surge associated with the winter storm is lowest among the storm events shown here, it demonstrates that the accumulation of water from coastal storm surge, sea level rise, and tide levels during a winter storm can flood coastal areas and simultaneously bury the city in massive, unprecedented amounts of snow.