During the winter, snow and ice accumulations and extremely cold temperatures can pose major and minor risks to public health, public safety, buildings, infrastructure, and the New York City economy.

Extreme cold, wintry conditions, and wind gusts all pose health risks to even to the most intrepid New Yorkers – increases in cold-related illnesses, such as hypothermia and frostbite, and worsened chronic health conditions for people suffering from respiratory or cardiovascular disease.

Hypothermia occurs after a person is exposed to cold temperatures for an extended period of time and their body loses heat faster than heat can be generated, causing a drop in their body’s temperature. Symptoms include shivering, fatigue, loss of coordination, blue skin, dilated pupils, slow pulse and breathing, and loss of consciousness, which potentially could be fatal.

Frostbite happens when the body's outer tissue freezes, affecting a person’s nose, ears, cheeks, chin, fingers, or toes. Symptoms include numbness, tingling, stinging, aching, and skin discoloration. Frostbite can cause permanent damage to whichever part of the body is affected and in severe cases, may require amputation.

Spending time in the cold — indoors and outdoors — can be dangerous. Those most at risk include people who are homeless and not protected in shelters,  who drink heavily or use drugs. In addition, people who are at increased risk are those who live in a home without heat. The risk of living without home heat affects most vulnerable New Yorkers:

Icy conditions during winter months often contribute to falls or other injuries for anyone venturing outdoors, but older adults are particularly vulnerable to slips and falls on icy sidewalks. A range of other injuries related to snowy, icy conditions are possible, including back injuries from strenuous snow shoveling. Being outside in snow or ice storms is especially hazardous for outdoor workers, people who are homeless, and other at-risk populations.

If a home lacks heat during winter months, residents sometimes resort to heating with alternative heat sources such as stoves, ovens, or charcoal grills, which pose fire and carbon-monoxide poisoning risks.  Space heaters, if poorly made or used improperly, also pose fire risks.

Trees and power lines that are downed during winter storms can put people at risk. Power outages are often caused by winter storms when trees topple onto power lines or ice weighs down power lines and brings them down.  Accidental contact with a downed power line can result in electrocution.

Power outages trigger a number of problems and increase risk for people living without backup power. Anyone that depends on electric medical equipment to sustain them is at risk if the power goes out.

Winter storms can disrupt utility supplies that provide heating to residents or tenants. If a winter storm interrupts the supply of fuel oil, natural gas, steam, or electricity to building heating systems, occupants’ health is at risk from the drop in building temperatures. Occupants could suffer from hypothermia or frostbite. If a person suffers from a chronic illness, such as asthma or another respiratory disease, their condition be exacerbated. Residents who use candles as their light source during power outages are at increased risk from setting accidental fires.

Home heat and/or power loss can happen during winter storms, but residents’ options to move are limited, particularly if they prefer to stay in their own neighborhood.  Because of New York City’s limited supply of available housing, there are few places to house displaced residents. The threshold for a housing emergency is a 5% rental vacancy rate, but the 2017 New York City Housing and Vacancy Survey (NYCHVS) cites only a 3.63% rental vacancy rate.

Icicles and snow falling from buildings during winter can injure pedestrians, damage vehicles, and disrupt transportation. Streets sometimes must be closed for safety reasons. Periods of heavy snow and ice can disrupt the city's infrastructure and services; strand commuters and other travelers; interrupt the flow of and access to food, medicine, and other essential supplies; and constrain emergency response and delivery of medical services.

Every category of wintry precipitation contributes to hazardous travel conditions, including freezing rain, which is the most treacherous. The risk of traffic accidents is more likely during winter storms in New York City. Even small accumulations of ice on roadways can cause accidents, injuring motorists, bicyclists, and pedestrians and potentially causing fatalities.

Even on the street, if a parked driver tries to stay warm in their car by running their engine and doesn’t realize that snow is blocking their vehicle’s tailpipe, carbon monoxide poisoning could occur quite rapidly and cause death. 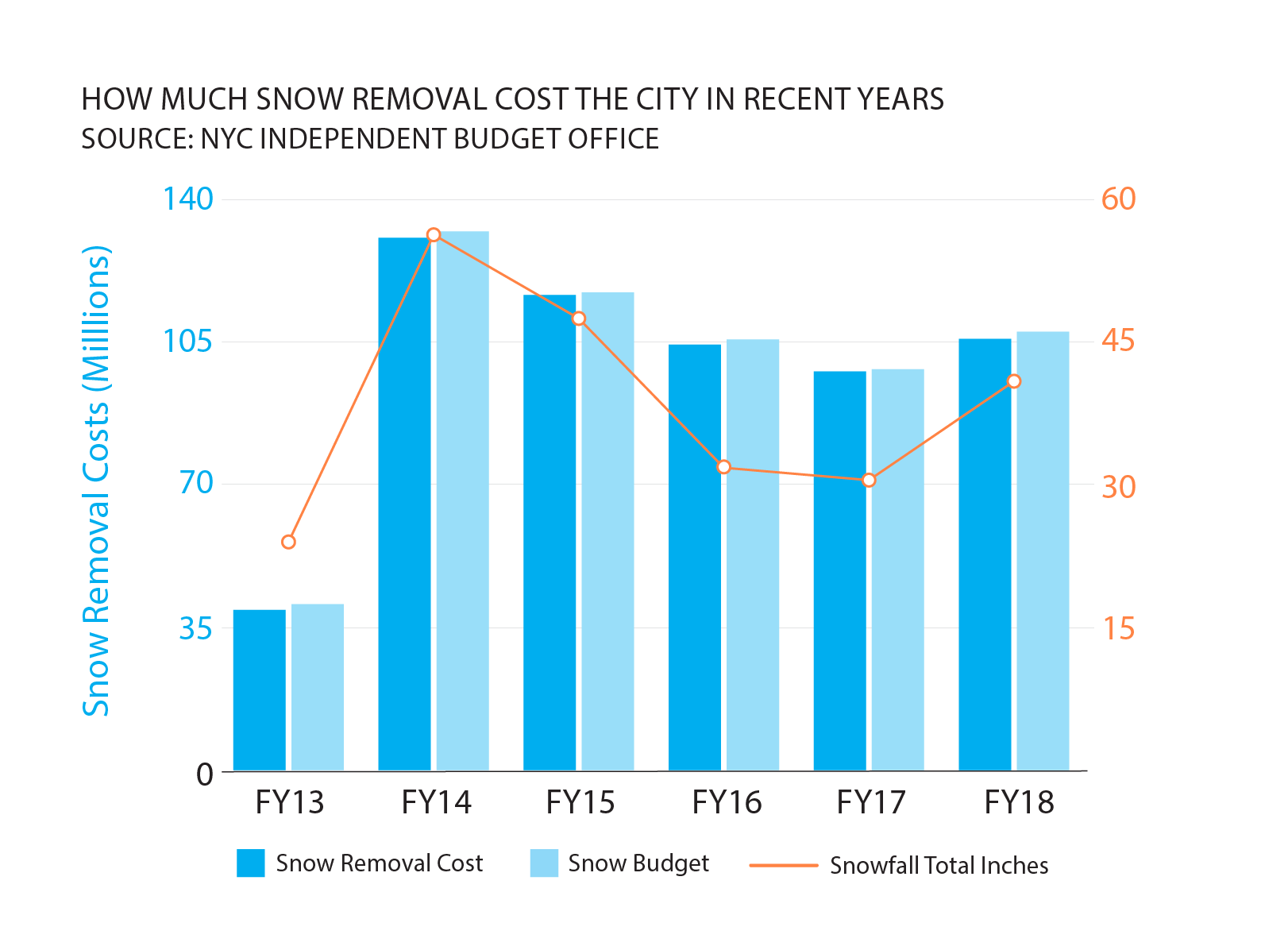 During and after major winter storms, businesses may see short-term revenue and productivity losses. Government entities may experience budget shortfalls as they take necessary actions to deal with unanticipated winter weather events.

Since New York is a global travel hub, winter storms that trigger flight delays and cancellations have the potential to disrupt travel on a global and national scale, with economic consequences for the flow of international and domestic business, conferences, meetings, and events.

In dealing with the consequences of winter weather, New York City’s Departments of Sanitation, Transportation, and Parks and Recreation may bear additional expense for snow and ice removal and for pothole repair. The City's budget for snow removal is based on a rolling five-year average of actual expenditures. Since 2014, the City has budgeted close to or exceeded $100 million due to increased snow events.

Ice accumulation affects roads, rail beds, and mass transit rail switch systems, creating difficult and dangerous conditions for commuters, commercial vehicle drivers, and other travelers. Bridges and overpasses are especially dangerous, because elevated roadways freeze before other road surfaces. If transit railways are subject to sustained extreme cold temperatures, they can break or crack under stress.

During winter months, freezing temperatures and repeated freeze-thaw cycles often cause potholes and increase the size of pre-existing road damage, which pose a risk of damaging vehicles and causing traffic accidents as vehicles unexpectedly swerve to avoid them.

During winter, New York City’s Department of Sanitation spreads rock salt on roadways to melt snow and ice. The thaw phase of freeze-thaw cycles can dissolve rock salt, creating the risk that this salty water seeps into manholes, corroding and short-circuiting underground electric cables. This seepage is a risk that could result in service interruptions, manhole fires, or in rare cases, explosions.

Ice storms often have a greater impact than heavy snowfalls because ice adds significant weight to tree limbs and overhead power and telecommunication lines. Power lines are built to withstand one-quarter of an inch of ice accumulation; however, nearby tree limbs can fall due to high winds, knocking out power and phone lines, even when ice accumulation is minor or nonexistent.

Winter weather also has an impact on New York City’s building stock. Some buildings accommodate drops in temperature better than others due to three factors -- the type and size of windows, the amount of air escaping through cracks and leaks in the walls, and the amount of wall and roof insulation. Older buildings constructed according to less-stringent building codes are more vulnerable to drafts because leaks in the walls, windows, and doors are more likely. Buildings constructed according to more recent construction codes and standards have more effective thermal protections.

Poorly maintained vacant wooden buildings, which constitute only a small portion of New York City’s total building stock, are most at risk for winter damage. New York City rarely experiences building collapses or structural damage due to snow and ice; however, it is possible. If a building’s roof structure is not properly maintained, snow accumulation can cause damage, leaks, and roof collapse.

The potential for roof damage depends on a combination of several factors -- the type of snow, frequency of snow events, and extreme cold temperatures. For example, a big layer of wet snow, which is heavier than normal snow, puts more stress on roof structures.  More frequent snow events in combination with extreme cold temperatures may cause higher snow accumulation and increase weight on a roof.

Decaying wood or brick masonry can also be made worse by winter weather. Standing water in masonry cracks could turn to ice that leads to damage on the building’s façade.

Frozen or burst pipes, a common occurrence during cold spells, may interrupt water and gas supplies and damage drainage systems.

When snow and ice melts, the runoff flows into New York City’s sewer system.  Risk occurs if the volume of runoff combined with the volume of sanitary waste exceeds the capacity of the City's wastewater treatment plants to handle the excess volume. When this occurs, untreated wastewater is discharged into local waterways, creating risk to human health and marine life.

According to the New York City Panel on Climate Change, projections indicate that snowfalls will become less frequent, the length of snow seasons will decrease, and winters are also projected to be warmer.  By the 2020s, the number of days per year with minimum temperatures at or below 32 F is expected to decrease by 25% and by more than 33% by the 2050s. This indicates that snow accumulation will last for shorter timeframes than it currently does. However, it should be kept in mind that these are projected changes in decadal averages. Individual winters could still have as much snow and snow cover as our current climate, though the projections show that these types of winters will occur less frequently. The projected changes to the risk from extreme ice storms as the climate modifies over time is still uncertain.